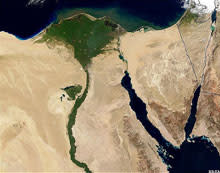 Contrary to conventional wisdom, fish in the Nile delta are thriving in waters polluted with fertilizers and sewage, according to a new study. While nitrogen-rich runoff usually causes excessive growths of algae and plankton that suffocate other marine life, the Nile delta is different because it has suffered from a lack of autotrophs (that fish feed on) ever since the Aswan Dam was built in the 1960s. Researchers found that more than 60 percent of the current fishery production in the region can be attributed to human-generated runoff.

The building of the Aswan Dam on the Nile blocked off much of the fertile floodwater that drains into the Mediterranean Sea,

which in turn produced a sharp fall in the number of fish being landed by Egypt's fishermen. "But in the late 1980s, the coastal fishery began to exhibit a surprising recovery," the researchers observed. "Today, landings are more than three times the pre-dam level" [BBC News].

In most bodies of water, human-generated runoff would create dead zones by upsetting the normal biological balance. However, the southeastern Mediterranean Sea is different because it is a “marine desert” in which nutrients are quickly exploited, said Autumn Oczkowski...

The increase in fish production coincided with the rise in fertilizer use along the Mediterranean coast. To quantify the effect, researchers collected more than 600 fish from four regions contaminated by runoff and two regions that were not. In regions affected by runoff, the fish contained nitrogen isotopes that could be traced to anthropogenic sources of nitrogen, according to the study published in the Proceedings of the National Academy of Sciences.

“Add any fertilizer, and you’re going to see a big effect,” [The New York Times]. The situation in the Nile delta appears to be a case of two anthropogenic negatives--the dam and the runoff--canceling each other out.

The question now is whether the current conditions are sustainable, or whether there will be a tipping point after which the runoff will become detrimental.

The same transition happened along the Gulf Coast, said Dr. Rabalais, the executive director of the Louisiana Universities Marine Consortium. “The area near the Mississippi River Delta in the 1960s was known as the ‘fertile fisheries crescent.’”... Now, she said, increased nutrients are “leading to a massive dead zone most springs and summers” [The New York Times].

But for now, at least, Oczkowski says,

"The Egyptians don't think it's a bad thing. For them, it's producing tonnes of fish and feeding millions of hungry people" [BBC News].