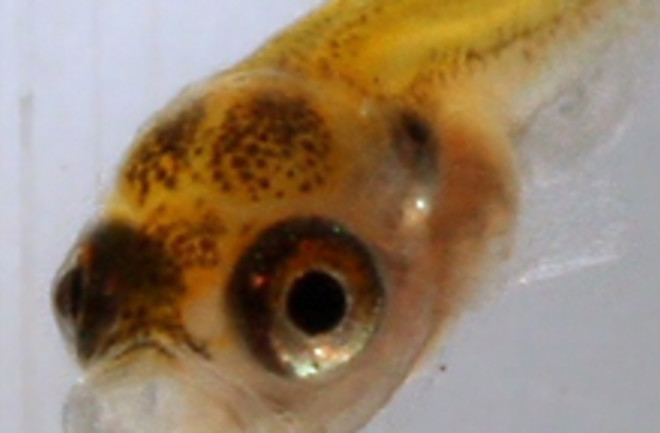 Two-headed fish are turning up in Australia's Noosa River, and experts believe it's due to something in the water. Millions of fish larvae have been found with two heads (that means one more eye than Blinky) and none of them survive to adulthood. Aquatic animal specialist Matt Lando puts the blame on noxious chemicals wafted from a nearby macadamia nut farm. He said,

"When we used the water on-site or have taken bass from the Noosa River those fish appear to have been contaminated and they give rise to deformed or convulsing larvae... I have been working in aquaculture for 10 years and this is the first time I have ever seen anything like it" [AFP].

Last October, Lando sent a report to the Department of Primary Industries and Fisheries in which he identified the pesticide endosulfan and the fungicide carbendazim, both used on the neighboring macadamia nut plantation, as the likely culprits.

"The timing between the mist spraying and the affected larvae fits hand in glove," he said. Dr Landos's report also found that chickens, sheep and horses raised at the Sunland Fish Hatchery at Boreen Point were recording abnormally high levels of foetal deaths and birth defects [The Sydney Morning Herald].

According to Lando, about 90 percent of the larvae spawned from bass taken from Noosa River have deformities and not one survived past 48 hours. Although Lando said concentrations of the toxins are probably low enough that there is no danger for people swimming in the river or eating fish from it, he also added,

Both chemicals are currently legal in Australia. Carbendazim was voluntarily withdrawn from the U.S. market in 2001 by the chemical company Dupont. Endosulfan is already banned in 55 countries and New Zealand will become the 56th starting this Friday.