Sugar Decreases the Havoc That Meth Wreaks on Fruit Flies

: Anxiety. Insomnia. Hallucinations. Methamphetamine's effects on the human brain are well documented, but researchers know relatively little about how the drug affects the body on the molecular scale. Looking at fruit flies (Drosophila melanogaster), scientists have detailed how meth disrupts chemical reactions associated with generating energy, creating sperm cells, and regulating muscles. Most interestingly, they discovered that meth-exposed fruit flies may live longer when they eat sugar. "We know that methamphetamine influences cellular processes associated with aging, it affects spermatogenesis, and it affects the heart," says University of Illinois entomologist Barry Pittendrigh. "One could almost call meth a perfect storm toxin because it does so much damage to so many different tissues in the body." How the Heck: 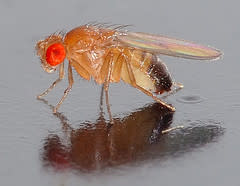 Not So Fast: Scienists need to conduct follow-up tests on mammals before they can say for sure whether these results apply to animals beyond fruit flies. The Future Holds: