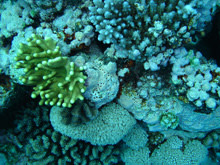 The growth of the world's largest coral reef system has slumped to its slowest rate in at least four centuries, according to a new report in

[subscription required]. Researchers studying coral colonies in the Great Barrier Reef found that calcification, the process that builds the reefs, has dropped 13.3 percent since 1990. They fear the decline is indicative of a worldwide threat to coral reefs caused by rising seawater temperatures and ocean acidification.

The loss of coral growth threatens food webs and may lead to “precipitous” changes in biodiversity, the authors said [Bloomberg].

The Great Barrier Reef along the northeast coast of Australia stretches more than 1,200 miles and is visible even in space.

Coral reefs, delicate undersea structures resembling rocky gardens made by tiny animals called coral polyps, are important nurseries and shelters for fish and other sea life. They also protect coastlines, provide a critical source of food for millions of people, attract tourists and are potential storehouses of medicines for cancer and other diseases [Reuters]. Massive coral reefs materialize from the gradual accumulation of calcium carbonate by billions of coral polyps over thousands of years.

The researchers analyzed calcification rates in 328 colonies of Porites corals from 69 reefs of the Great Barrier Reef dating back to 1572.

Calcification rates dropped from 1.76 in 1990 to 1.51 in 2005—the steepest decline in four centuries. If this pattern continues, the researchers predict reef-building may cease by 2050 and the Great Barrier Reef may begin to collapse by 2035. Says study coauthor Glenn De’ath: “The reefs will slowly break down, be taken over by algae....

The loss of habitat for small fish will lead to reductions in their populations, which in turn cascade up the food chain to predators, and so on. The reef will still exist, but will be very different and far less diverse” [Times Online].

The researchers believe the abrupt decline in coral growth is caused by ocean acidification, which is driven by increasing levels of greenhouse gases.

The burning of fossil fuels over the past century or so has driven atmospheric CO2 levels from 280 parts per million (ppm) to 387 ppm—and growing. More than 25 percent of this extra CO2 is absorbed by the world's oceans and reacts with seawater to form carbonic acid. A rising carbonic acid level means a more acidic ocean [Scientific American].

Related Content: 80beats: In a More Acidic Ocean, Coral Reef "Skeletons" Could Crumble 80beats: Coral Reefs Could Die Off Within the Century