In a More Acidic Ocean, Coral Reef "Skeletons" May Crumble 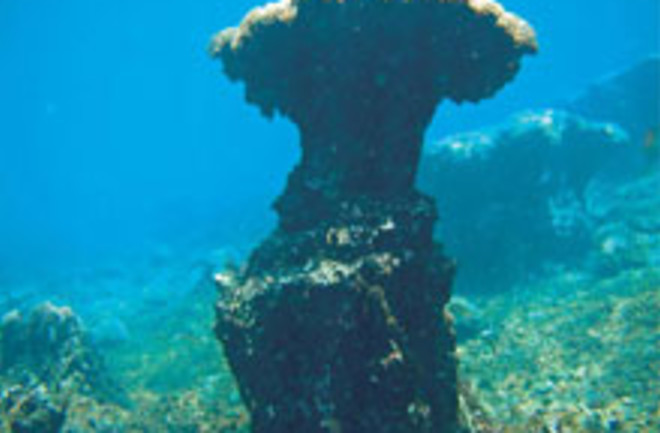 Coral reefs can resemble underwater monuments, with strong towers and meandering walls that stand firm against the tides. But a new study says that if global warming causes ocean water to become more acidic those elaborate structures may crumble because the cement-like binding agent that holds the reefs together won't be able to form in those inhospitable waters. Most of the world's coral reefs aren't yet showing signs of this degradation, as ocean pH is slow to change and reefs form slowly. But researchers got a chance to peer into the possible future in

an area of the eastern Pacific off Central America... where the water is more acidic than elsewhere, thanks to the upwelling of carbon-dioxide-rich waters. Coral reefs in this region are poorly developed and tend to erode rapidly [The New York Times].

Coral reefs consist of millions of skeletal structures made of calcium carbonate, within which live the tiny polyps that form the colorful, living part of the coral. The new study, published in the Proceedings of the National Academy of Sciences [subscription required], shows that

acidic waters make it impossible for marine cement—limestone that precipitates out of the seawater as it flows against the coral reef—to form both between individual coral polyps as well as to anchor the entire reef ecosystem against the waves [Scientific American].

This finding is the latest piece of ominous news regarding the fate of coral reefs in a warmer world; other studies have indicated that the polyps themselves will die in warmer waters.

"Until now, we've mostly addressed acidification in terms of what it does to the living organism," said study author Joan Kleypas.... "Here we're finding that the reef structure itself can certainly feel the effect of ocean acidification, even if the biology somehow finds a way to cope with acidification. This is mainly an inorganic process, so we're looking at something that will happen regardless of what the biology does" [Discovery News].

Image: T. B. Smith Related Posts: Coral Reefs Could Die Off Within the CenturyU.S. Coral Reefs Are Getting Sicker and Sicker