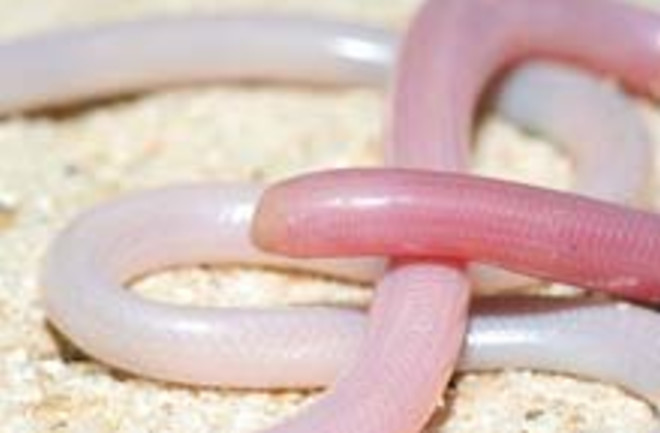 Some of the weird wildlife on Madagascar—its mammals especially—probably arrived there by rafting from mainland Africa, we reported back in January. But not its blind snakes. According to a study out now in Biology Letters, these funny-looking creatures date back 150 million years to the Gondwana landmass, and have lived on Madagascar since before it broke off from India and drifted away. And, the researchers say, their story of spreading around the world carries many more twists.

Growing to about a foot long, blind snakes act a lot like worms, burrowing under the surface of every continent except Antarctica. Unlike worms, though, blind snakes have backbones and tiny scales [National Geographic]

. They earned their moniker by having blurry vision and sensing chemicals through their skin to find their way around. But despite having backbones, there are few blind snakes in the fossil record, making it hard for researchers to study their evolutionary history. So lead researchers Blair Hedges and Nicolas Vidal had to rely on living species.

They extracted five nuclear genes, which code for proteins, from 96 different species of worm-like snakes to reconstruct the branching pattern of their evolution, allowing the team to estimate the times of divergence of different lineages using molecular clocks [UPI]

. Vidal and Hedges found that the snakes date back all the way to Gondwana, and that the particular kind that live now on Madagascar date back to "Indigascar," the name researchers use for the landmass of Madagascar and India before they separated nearly 100 million years ago. Says Hedges,

, while the ones left on Madagascar eventually became a separate family. But they also found something rather unlikely: These small snakes must have done at least some of their worldwide travels by rafting across the water. They say that blind snakes showed up in Australia 28 million years ago, but at that time no land connections to the continent remained.

. Burrowing animals don't tend to travel by rafting, Hedges acknowledges. But because the timetable doesn't work out for the snakes to have spread to those places by continental drift, and because blind snakes aren't exactly the flying type, she says this unlikely answer is the most likely one. Related Content: 80beats: Study: Madagascar's Weird Mammals Got There by Rafts 80beats: Madagascar Chameleon Makes the Most of a 4-Month Life Discoblog: Scientists Find Oddball Right-Side-Up Bat in Madagascar DISCOVER: A Bridge To MadagascarImage: Blair Hedges