Madagascar Chameleon Makes the Most of a 4-Month Life 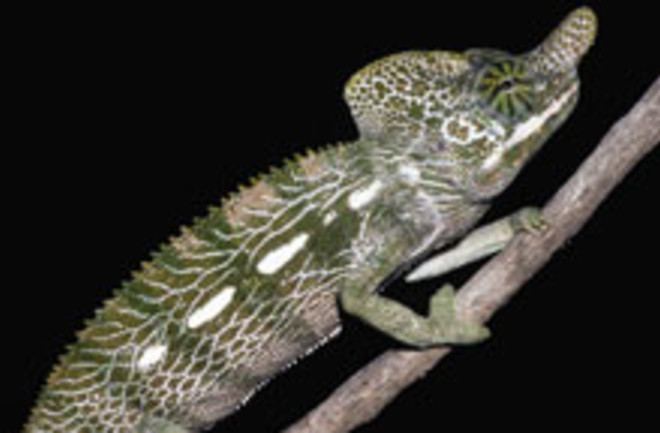 Researchers say a tiny chameleon in Madagascar can lay claim to a strange record: It has the shortest lifespan of all four-limbed vetebrates. The astonishing Furcifer labordi spends eight months inside its egg, hatches in November, and then spends four months reaching maturity and mating before dying in April. By then the members of the next generation are already contained inside their eggs, ready to begin the cycle again.

The chameleon's short life coincides with the rainy season in the arid region of Madagascar, and study coauthor Christopher Raxworthy says the lifecycle may be a response to the harsh climate. Raxworthy said that at about 3 inches long, F. labordi is the smallest of the region’s chameleons and may be less able to compete for food or more prone to desiccation in the dry season. “The best payoff may be to produce larger clutches and more offspring, rather than to conserve reserves and try to make it through the dry season as an adult,” he said [The New York Times].

In the report, published in the Proceedings of the National Academy of Sciences [subscription required], researchers say the chameleons' lifecycle is more reminiscent of an insect or an annual plant than a vertebrate. Although it's unusual,

"It's worked for them up to this point, otherwise they would be extinct" [National Geographic News].

At least the chameleons' short lives are dramatic, researchers say. "These males will fight fiercely in long, rather drawn-out combats, and their courtship behaviour is also rather violent," [says] Karsten.... He thinks the chameleons may have high levels of androgens – a class of sex hormones – or be particularly sensitive to them. This could explain their aggressive mating behaviour and relatively early death. Animals with high levels of androgens expend a lot of energy and can have suppressed immune systems. As a result they tend to have short life-cycles [New Scientist].