Stone Tools From India: Another Blow To Human Evolution Model? 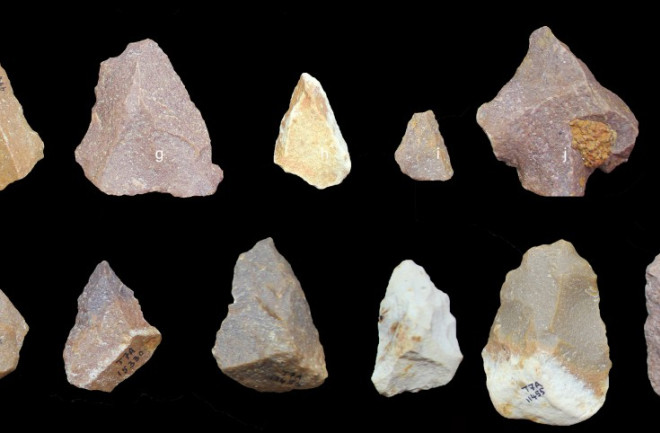 Thousands of stone tools excavated from a site in India suggest that a sophisticated tool-making technology arrived in South Asia much earlier than once thought possible, say researchers. (Credit: Sharma Centre for Heritage Education, India) A new study on stone tools from a site in India offers the latest challenge to the model of human evolution and migration that has dominated paleoanthropology, particularly in the West, for decades. The artifacts, which the researchers say were produced with a sophisticated style of tool-making, are hundreds of thousands of years older than might be expected. What does it mean? Well, that part of the story is still up for debate. At the archaeological site of Attirampakkam in southeastern India, near Chennai, researchers have collected more than 7,000 artifacts, many of them stone tools that appear to show a transition from an early style of tool-making to one that's more sophisticated. The shocker: if the analysis is correct, the transition occurred more than 200,000 years earlier than expected based on previous evidence. Tool-making styles, or technologies, are important in the study of human evolution and migration for a couple reasons. For starters, stone tools have a habit of sticking around long after human remains have disintegrated. Ashes to ashes, dust to dust and all that. But the complexity of the tool technology — how the tools were made — also can reveal a lot about the cognitive ability of the toolmaker. The earliest tools at Attirampakkam belong to the Acheulean technology. Instantly recognizable by its teardrop shape, the Acheulean handaxe in particular was a considerable improvement on earlier Oldowan technology.

Example of an Acheulean handaxe from Egypt. (Credit: Wikimedia Commons) Like Oldowan before it, all indications are that Acheulean technology emerged in Africa. When Homo erectus, the first known member of the genus Homo to leave Africa, up and left about 1.9 million years ago to spread across Eurasia, they were carrying Acheulean tools. (An exception would be the hominins found at Dmanisi, in the Caucasus, which are nearly 1.9 million years old and were found with more primitive Oldowan tools.) What a Tool Hundreds of thousands of years later, the Levallois technology appears in the archaeological record, representing another significant improvement. In this method, one side of a stone called a core is pre-shaped. That pre-shaped portion is then struck off the core, fully formed. Levallois style tool-making allows for greater precision and sharper edges. It's found in much of Africa and Eurasia, but there is some debate over whether the technology was spread by a single tool-tastic culture as it migrated or sprung up independently in multiple places among different populations. While it appears in the archaeological record at different times in different places — and is associated with more than one member of the genus Homo — Levallois technology is associated most closely with the Middle Paleolithic, which was, more or less, 50,000-325,000 years ago (that's a generous "more or less," not only because there is considerable variation between locations, but also because researchers disagree on what constitutes start and end dates).

One key thing to know about Levallois technology is that, until today's paper, the previous strong evidence of it in South Asia was less than 100,000 years old. Using a type of luminescence dating called post-infrared-stimulated luminescence (pIR-IRSL), the researchers analyzing the Attirampakkam artifacts created a chronology of tool technology at the site over a span of about 200,000 years. And during that period, the researchers say they identified an emergence of Levallois technology about 385,000 years ago. For some context, last year's spectacular announcement from Morocco revealed human fossils — and Levallois tools — that were about 300,000 years old. The Levallois tools at Attirampakkam are significantly older and thousands of miles from Africa. Tool Good To Be True? To say this would be a game-changer for our understanding of human evolution and dispersal is somewhat of an understatement, but let's look a little closer at the paper. The authors are suggesting that a Middle Paleolithic culture turns up in what's now southeastern India at roughly, or even before, signs of it in Europe and Africa. That, in the researchers' minds, means that either local populations of hominins developed the technology or that modern human migrations out of Africa occurred much earlier than any evidence found so far. (As for the latter, remember that the timeline for Homo sapiens leaving Africa has been continually pushed back in recent years. It is generally agreed, however, that early waves of H. sapiens migration out of Africa began around 100,000-125,000 years ago, with the largest waves 40,000-80,000 years ago, again with a generous "more or less." Fossils such as Misliya-1, however, announced last week, continue to challenge even that "more or less" timeline.) The stunning claims made in today's paper are not a slam-dunk, however. One unfortunate aspect of the research is that it did not turn up any hominin fossils associated with the tools, as happened with, for example, Misliya-1, which was found in Israel with Levallois tools and dated to be at least 177,000 years old. Not having a fossil associated with any of the tools from the 200,000 year span represented at Attirampakkam makes it impossible to draw any conclusions about who made them. "We really don't have much of a fossil record to go on at all in South Asia," says James Blinkhorn, an archaeologist at the University of Liverpool and the Max Planck Institute for the Science of Human History in Jena, Germany. Blinkhorn, who was not involved in the new study, focuses on both Paleolithic archaeology in general and the prehistory of South Asia in particular. Blinkhorn expressed skepticism about a number of aspects of the paper. Even with the supplementary material published concurrently, Blinkhorn felt the authors needed to make a much stronger case for their paradigm-shifting conclusions, including how they define Levallois technology and how they prove that the artifacts fit that definition. In fact, it's unclear whether any of the tools cited by researchers as Levallois technology are indeed that, based on the information provided in the study. "It looks more like Late Acheulean rather than a Middle Paleolithic site," Blinkhorn says of the Attirampakkam artifacts. Also of note: at other sites, once Levallois technology was developed, it was embraced and quickly spread through a region. If so sophisticated a style emerged at Attirampakkam, why did it stay there for, apparently, more than 200,000 years without gaining wider popularity?

"If they were an independent innovation in Southeast India, why didn’t they spread (as occurred in other old world regions like East Africa)," Blinkhorn added via e-mail. "Of course, the dated evidence from India is sparse, but my point here is that there are alternative explanations that were either not raised or not treated with any depth."

Carl Sagan, echoing the thought of many an earlier science enthusiast, said "Extraordinary claims require extraordinary evidence." We've been here many times before in paleoanthropology, most recently last spring when a paper

, also in Nature, suggested hominins were present in what's now California more than 130,000 years ago. Personally, I think that the thing this paper proves is not whether hominins developed Levallois technology in India 385,000 years ago — it's that India, like many other areas of Asia, has been underinvestigated by paleoanthropologists, and that many more sites (which may ultimately prove or disprove the claims made today about Attirampakkam) are out there, just waiting to be found. The research

on the Attirampakkam artifacts appears today in Nature.