Researchers develop new ways to discover how our oldest tech — and our brains — evolved. 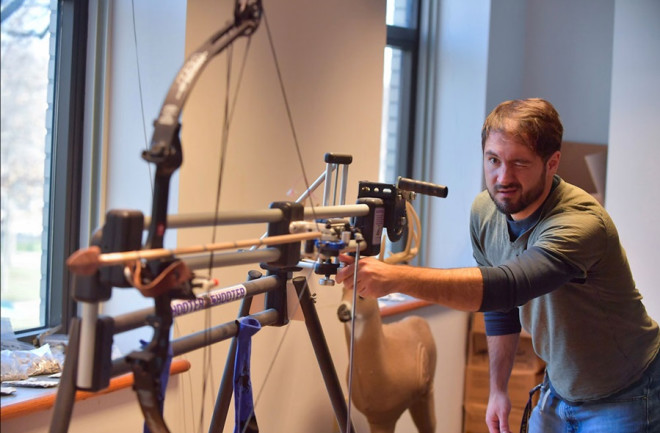 Kent State University archaeologist Metin I. Eren takes aim with the Spot Hogg Hooter Shooter, a modern automatic bow launcher testing an ancient weapon: an arrow tipped with a stone point. Eren’s lab creates replicas of the prehistoric points and other tools to learn how they were used. (Bob Christy/Kent State University)

In the Kent State University laboratory for experimental archaeology, the Spot Hogg Hooter Shooter, an automatic bow launcher, fires arrows filmed by high-speed cameras. The arrows are tipped with stone points, which are replicas of ancient artifacts.

The replicas are “worthless ... so we can break them and use them in ways that we can’t with the real artifacts that are priceless,” explains archaeologist Metin I. Eren, who leads the lab. To better understand ancient stone tools, his team creates facsimiles and tests their mechanical properties.

It’s just one of the cutting-edge ways archaeologists study humanity’s oldest — and arguably most pivotal — technology. Without stone tools, says Eren, “we wouldn’t be the species we are today.”

As early as 3.3 million years ago, human ancestors began bashing rocks into tools — a move that set our lineage on a distinct evolutionary path. For the next 99 percent of our time on this planet, our ancestors depended on stones to survive: for hunting, food preparation, constructing clothes and shelter. While artifacts made of wood and other perishable materials degraded, those made from rock endured. Thus, stone tools provide the richest record of human behavior across time and space. Archaeologists have dug up billions of them.

Every one of those artifacts “has a story. It has a history of the people that made it and used it,” says Christian Tryon, an archaeologist at Harvard University. It’s just a matter of learning to read the stones.

“Here’s the problem: Stone tools are the least-familiar things we excavate,” says archaeologist John Shea of Stony Brook University. “When you find a pot, you can say it looks like a pot. Or you find a temple. It looks like a temple.”

Because stone tools are a forgotten technology, the purpose behind different styles is not self-evident. Scholars in the 19th century devised names, like scraper, point and burin, based on shape and assumed function. But they had no evidence that scrapers scraped or points impaled.

Unsure how stone tools were used, archaeologists fared better at determining how they were made. Typically, a rock (the hammerstone) was used to strike another rock (the core) to remove a slender piece (the flake) that was further sculpted into the desired form, such as an arrowhead or knife. To ensure the flake fractured with the right proportions, toolmakers often first shaped the core by knocking off scrap pieces in a systematic way.

Researchers deduced these steps through feats of reverse engineering. In the 1894 book Man, the Primeval Savage, Worthington G. Smith reported his efforts to reassemble flakes and scraps into their original cores, like 3-D jigsaw puzzles. For three years he studied 2,259 pieces recovered from a site in England, managing to rejoin more than 500 of them (and concluding that shellac dissolved in spirit was the best adhesive for the job).

Though tedious, this methodology of refitting has proven essential for understanding stone tool production. Some reassembled cores have dozens of pieces, each a step in a complicated sequence of premeditated maneuvers.

“Making a stone tool is not a random procedure,” says Tryon.

“Most people think you need to beat the hell out of these things,” says Tryon. “That it requires brute strength. It does not. It’s more finesse. ... It’s rhythm. It’s gesture.”

The Point Of It All

Eren started making stone tools in college classes, but to become an expert, he trained at the University of Exeter under Bruce Bradley, as well as with Jacques Pelegrin and Robert J. Patten, all renowned for their toolmaking skills. “It was like a true apprenticeship,” Eren recalls.

For two years, Eren practiced the craft about eight hours a day — save one day per week, when he restocked his rock supply by hiking the beaches of South England, loading a backpack with 150 pounds of flint.

Now he can create any tool type by hand from the 6,000 pounds of rocks his lab houses, shipped from around the world. When identical copies of tools are required, his team uses lapidary equipment, or rock-cutters, to mass-produce them. This unlimited supply of replicas — “as many as we need for statistical validity,” Eren says — enables them to conduct destructive experiments, like firing from the Spot Hogg Hooter Shooter. The goal is to test why tools had certain properties: Was a form preferred because it was aerodynamic, durable or just in fashion?

Eren recently investigated tools made by early Americans some 13,000 years ago called Clovis points, which have distinctive channel-like divots known as flutes. Based on debris found at archaeological sites, Clovis people broke about 15 to 20 percent of their points while trying to flute them. The risky habit has perplexed scholars, with some speculating that it was an artistic flourish, a way for toolmakers to show off. But in a study this year in the Journal of Archaeological Science, Eren and co-authors found that fluting was practical. Through computer simulations and experiments that included mechanically crushing replicas with controlled force, they showed that flutes provided shock absorption, preventing points from breaking upon impact.

Replication experiments demonstrate what different types of stone tools could have done, but they do not reveal what any particular artifact did. About a decade ago that question drove Gilliane Monnier, an archaeologist at the University of Minnesota, to put an artifact under an electron beam.

“It was clear there was stuff on that tool. I didn’t know what kind of stuff, but there was stuff,” recalls Monnier. She became intrigued by the possibility that artifacts might preserve particles from softer materials they once contacted, such as animal hides and wood.

Residue analysis got started in the 1970s, but materials were often identified by their visual appearance under a microscope — a highly subjective method. Other approaches, which measured elemental or molecular composition, were considered reliable but destroyed the residues.

Monnier wanted to find an accurate but non-destructive approach. So she began gunking up tools with known substances, the same way our ancestors might have done: whittling wood, slicing roots and grasses, even processing animal parts.

“Getting blood wasn’t too difficult in Minnesota,” she adds. “I was able to call my butcher, who knows me pretty well now.”

Monnier had colleagues perform traditional residue analysis on the objects and found that most residues cannot be visually distinguished with confidence under a normal microscope: In one study, trained researchers misidentified Monnier’s modern specimens nearly 1 in 4 times.

Since then, Monnier and colleagues have experimented using infrared and other forms of radiation to measure residue composition. Results on modern materials as well as artifacts with known residues have been promising.

In a 2013 study, for example, researchers removed bits of residue from stone points up to 130,000 years old and used a destructive technique to identify the substance as bitumen. This natural tar likely adhered the points to wooden spears that had long since decomposed. That same year, Monnier analyzed some remaining gunk on the same tools with X-ray and infrared beams and also identified bitumen, proving it was possible to do non-destructively.

Having verified her methods, Monnier is eager to analyze unstudied artifacts, “and probably get some surprises.”

Tooling Around the Brain

Some researchers think stone tools can answer the big questions in human evolution: How do we differ from other primates and when did our unique human traits emerge?

Chimpanzees and some monkeys use tools to a limited extent; they crack open hard-shelled foods with stones as natural hammers and anvils. Pre-human ancestors began breaking rocks to get sharp edges as early as 3.3 million years ago. By 2.6 million years ago, they did so in a standard way, producing what archaeologists call Oldowan tools. But a major innovation transpired around 1.8 million years ago: Homo erectus began sculpting rocks into intentional forms, making teardrop-shaped tools known as Acheulean hand axes.

According to Shea, these hand axes were “shaped to be carried efficiently. The average length and width are identical to a Samsung Galaxy 7.”

Researchers hypothesize that the technological leap was driven by a cognitive leap, an evolution in brain wiring.

To test this, Shelby Putt, an anthropologist at the Stone Age Institute and Indiana University, compared the brains of modern people making Oldowan and Acheulean tools in a study published earlier this year in Nature Human Behavior. As trained volunteers worked stones, they wore caps sprouting wires connected to functional near-infrared spectroscopy (fNIRS). This neuroimaging technique is like MRI, but allows subjects to move freely.

When participants made Oldowan tools, brain areas lit up related to vision and movement. Chimps smashing nuts probably engage this level of cognition. Acheulean toolmaking, however, required integration of higher-order regions that are responsible for sensory and motor control, memory and planning. In fact, it was a brain network nearly identical to what’s activated when people play the piano.

“We don’t see any chimps playing the piano,” says Putt. She believes that Acheulean tools mark a turning point in our evolution from ape-like to human-like brains.

The species that made that turn went extinct long ago, but the stone tools that bore witness to it survive — “the common heritage of all humanity,” says Shea.

[This article originally appeared in print as "Stone Cold Science."]