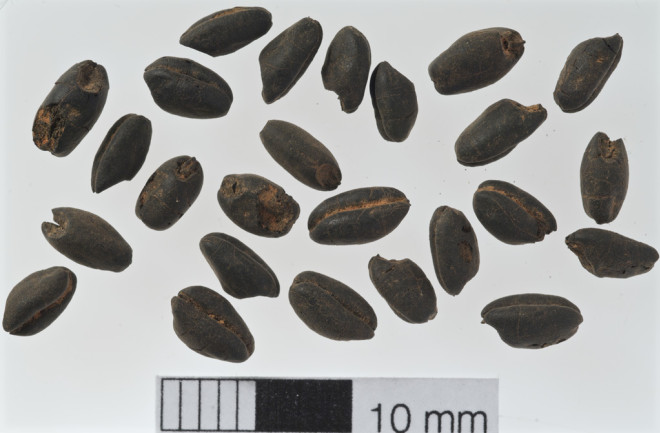 Naked wheat grain from Koufovouno, southern Greece. Courtesy Amy Bogaard Claims about early agricultural practices and how much grain our ancestors ate are apparently full of… manure. As early as 8,000 years ago, Stone Age farmers across Europe were working their crop lands intensely, irrigating and strategically applying manure, according to new research published in today’s Proceedings of the National Academy of Sciences. The findings also call into question previous estimates of how much protein in the Neolithic human diet was derived from animals rather than plants.

Researchers based their study on the chemical composition of charred cereals and pulses — the edible seeds of legumes — at 13 Neolithic sites spread from Bulgaria to England, dating from 4,400 to almost 8,000 years ago. Where possible, they also analyzed wild vegetation and the bone collagen of both domestic and wild herbivores from some of the sites. The team looked at stable carbon and nitrogen isotopes in the materials. Studies of modern crops have previously shown that adding manure to the soil changes the level of nitrogen-15, a rare stable isotope, in the plants themselves, a finding which the team applied to the Stone Age specimens. Increased levels of nitrogen-15 in the cereal and pulse samples suggested the Neolithic crops were intensely managed, with regular manure application. Researchers also discovered, at one Greek site dating back 7,800 years, strategic use of manure: farmers there concentrated on manuring wheat and pulses but expended little to none of the resource on barley, which is more tolerant of poor soil.

Levels of nitrogen-15 in prehistoric human remains have usually been taken as evidence of meat-eating. Consumption of meat and other animal-derived proteins increases nitrogen-15 levels in bones. But cereals and pulses that received manure while growing would have also raised the nitrogen-15 levels in humans who ate those crops. Thus, the researchers say, previous studies may have grossly underestimated the importance of cereals and pulses in the typical European diet at the time. And croplands were clearly distinct from pasture in these Neolithic sites. Nitrogen-15 levels in both the wild and domestic herbivores studied, as well as plant material from the sites’ non-cultivated areas, were consistent with modern unmanured vegetation. The levels also suggest that, while farmers made use of their livestock’s dung to nurture their cereals and pulses, they didn’t allow their animals to graze in these choice fields and instead pastured them or fed them unmanured fodder.

The researchers also examined levels of carbon-13. Although levels of this isotope are mostly unaffected by the presence of manure, they can reveal how much water a crop received. When carbon-13 levels vary significantly between crops and nearby wild vegetation, it can be indicative of irrigation. The team found expected variations in carbon-13 between Stone Age samples from more humid Mediterranean sites and those from Central Europe. According to the researchers, however, overall sample levels suggested there was widespread water management, such as irrigation, in Neolithic agriculture throughout Europe. The study’s findings of early intense land management will serve as the basis for further research into Europe’s Stone Age agriculture — and perhaps cause some consternation from groups eager to tout our ancestors' allegedly meat-heavy diets. (For recent research on vegetation consumption much earlier in our family tree, read how early hominids incorporated grains, grasses and sedges into their diet millions of years before the arrival of agriculture.)