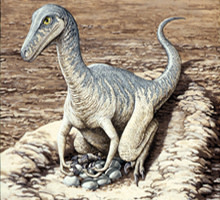 Don't let their fierce looks fool you: Some male carnivorous dinosaurs were actually devoted dads, researchers say. A new study examined the bones of three species of dinosaurs found sitting on fossilized egg clutches and declared that in these species, it was the males who sat on the nests and cared for the young.

The three types of dinosaurs, Troodon, Oviraptor and Citipati, lived roughly 75 million years ago and were theropods -- the primarily meat-eating group that also includes monstrous beasts like Tyrannosaurus rex and Giganotosaurus [Reuters].

The new findings upend some notions of dinosaur family life, and also suggest that birds, which are believed to have evolved from small, feathered dinosaurs, may have inherited this behavioral trait. Study coauthor Frankie Jackson says the study

"sheds light on the origins of parental care systems in birds." ... Males protect or support offspring in more than 90 percent of bird species -- a distinctly rare attribute in the animal world. In mammals, males provide parental care in 5 percent of species, and it's even rarer in reptiles [Washington Post].

In the study, published in Science [subscription required], the researchers

microscopically studied the bones of eight brooding adults to identify gender. Female birds in preparation for egg-laying generate extra bone tissue inside long bones like femurs. The mothers draw on these stored minerals during egg production. Traces of this extra bone can often be seen when avian leg bones are studied carefully. Past research on Tyrannosaurus and Allosaurus leg bones has proven that such traces can also be seen in dinosaur females [National Geographic News].

However, no such traces were discovered in any of the eight bones that the researchers examined. While that doesn't count as definitive proof, researchers say it certainly suggests that the brooding theropods were males. In another line of evidence, the

researchers compared the size and number of fossilized dinosaur eggs, which ranged from 22 to 30 large eggs per clutch, to the size and number of eggs in nests of modern-day birds. The unusually large size of the dinosaur clutches was most similar to the clutches of birds that exhibit paternal care, like emus and ostriches, even after body size of the adult bird was factored in [Science News].

The mothers are able to expend a lot of energy in creating large clutches of big eggs, researchers say, because they're freed from incubating and child-rearing duties, and can instead go off to forage and replenish their energy. Related Content: The Loom: Jurassic Dad has more on this discovery 80beats: “Bizarre” and Fluffy Dino May Have Used Feathers to Attract Mates 80beats: Carnivorous Dinosaur With Bird-Like Lungs DiscoveredImage: Bill Parsons

Planet Earth Did Humans and Dinosaurs Ever Live Together?
Recommendations From Our Store