"Bizarre" and Fluffy Dino May Have Used Feathers to Attract Mates 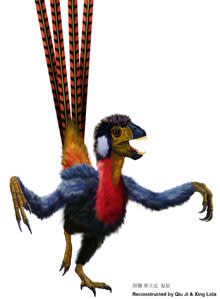 Researchers have found a "bizarre" feathered dinosaur with a hodgepodge of characteristics, including four long tail feathers that researchers say may have evolved for display purposes--perhaps to attract a mate or scare off a rival. The well-preserved fossil of the new species, named Epidexipteryx hui, shows that the beast was covered in short, fluffy feathers but lacked the "contour feathers" that help modern birds fly; researchers say Epidexipteryx must have been flightless. Paleontologist expert Angela Milner commented that the find

"shows that feathers were likely being used for ornamentation for many millions of years before they were modified for flight. It provides fascinating evidence of evolutionary experiments with feathers that were going on before small dinosaurs finally took to the air and became birds" [BBC News].

The fossil was found in Inner Mongolia, in a sediment layer that has been dated to around 168-152 million years ago; that suggests that the Epidexipteryx is slightly older than the most primitive known bird, Archaeopteryx, which lived 155 to 150 million years ago. In the article, published in Nature [subscription required], researchers say the new find fills in a gap in the evolutionary story.

"Although this dinosaur cannot be the direct ancestor for birds, it is one of the dinosaurs that have the closest phylogenetic relationship to birds," said [coauthor] Zhonghe Zhou.... "Therefore, it could provide a lot of information about the transition process from dinos to birds" [LiveScience].

Epidexipteryx lived in the mid- to late Jurassic period in a lush, well-vegetated area that was rich in salamanders and other possible prey. The dinosaur had claws similar to those of ground-foraging birds, such as ostriches and turkeys, and its front teeth were large and protruding. "One can certainly imagine [the teeth] being used to snatch at small prey, such as lizards, small mammals, or even insects," [coauthor Fucheng] Zhang said [National Geographic News].