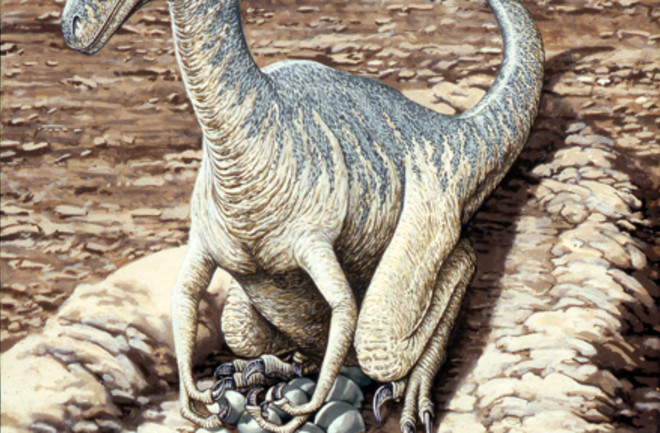 Birds are like nothing else on Earth--in the sense that they have lots of traits in common that are not found in quite the same package in other animals. All birds have feathers, for example, and they can either fly or have evolved from birds that once flew. You don't see some feathered reptile running around on all fours. But that distinctness is merely an artefact of extinctions. The closest living relatives of birds today are alligators and crocs, and they share a common ancestor that lived some 250 million years ago. All of the species on the lineage that led from that ancestor to birds are extinct. The ground-running dinosaurs disappeared. There are fossils of birds that could fly 120 million years ago, but they became extinct too. To see how birds became so unique, scientists have to burrow down the evolutionary tree, and burrow into the ground. I've written here about some of the things they've discovered in the process, such as flightless dinosaurs that probably used feathers to show off to the opposite sex. Feathered dinosaurs also laid eggs in nests and incubated them much as birds do today. And today (as in, this particulary day of the week), David Varricchio of Montana State and his colleagues are reporting that it was the father dinosaurs who were sitting on the eggs. The scientists use several lines of evidence to come to this conclusion. Among living birds and other reptiles, females have to use the calcium and phosphorus in their own bones to build the shells of their offspring. It turns out that the fossils of brooding dinosaurs show no sign of this sacrifice of minerals.

Another clue comes from the number of eggs in the nests of dinosaurs. There's a pretty clear correlation between the size of birds and reptiles and the volume of eggs they rear in their nests (the clutch volume). The bigger the animal, the bigger the clutch volume. But this correlation is actually different, depending on how the animals rear their young. In bird species where the fathers only sit on the eggs, the clutch volume is bigger for a given size of bird than for species where both parents care for the eggs, or just the mothers. Among crocociles, only mothers incubate eggs, and they also have smaller clutch volumes than dad-only birds. Varricchio and his colleagues plotted three fossils of dinosaurs sitting on nests onto a graph and found that their ratio of body size to clutch size is like father-only birds.

What makes this result particularly intriguing is that only 100 species or so of living birds are father-only incubators--including ostriches and tinamous. And they just so happen to belong to a separate lineage from all other living birds. On the tree I've reproduced here, they are the paleognathes. The blue marks the part of the dinosaur-bird tree in which fathers care for eggs. The black marks two-parent care, the green maternal-only, and the grey marks a lineage where the parental care is unknown. According to this tree, the paternal care of ostriches is actually a vestige of the earlier family systems of ancient dinosaurs. Only after the split of paleognathes from other birds over 65 million years ago did mothers start kicking in the help in the Neognathes. The authors suggest the ancestors of birds switched from maternal to paternal-only care for eggs as their eggs evolved to bigger sizes. Mothers had to spend more time and energy producing those eggs--and getting enough food to replenish the nutrients they used to produce them. This lineage of dinosaurs was probably also evolving a higher metabolism like that of birds today. Their eggs may have demanded more warmth as they incubated. Without Dad's help, Mom and kids alike would suffer. Only much later did some lineages of birds switch to a new kind of reproduction with two-parent care and smaller eggs. Source: Varricchio et al, Avian Paternal Care Had Dinosaur Origin, Science, doi: 10.1126/science.1163245 Images: Nest painting copyright Bill Parson. Egg fossils: courtesy of Museum of the Rockies Update: fixed some missing words 12/27. Thanks to readers for pointing out the error.