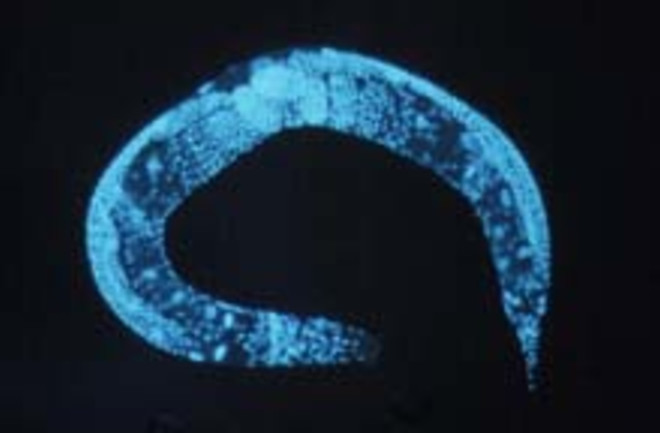 Feel like teaching a lesson to that pinhead-sized worm that's been bothering you? According to a study in the Journal of the American Chemical Society, a material called dithienylethene plus a blast of UV light can stop a worm in the midst of its worming, rendering it temporarily paralyzed.

The researchers fed a light-sensitive material — a "photoswitch" known as dithienylethene — to the transparent worms. When exposed to ultraviolet rays, the molecule turned blue and the worms became paralyzed. Using visible light instead made the chemical turn colorless and the paralysis ended [LiveScience]

. Scientists aren't sure why the transparent nematodes became paralyzed, but they know dithienylethene changes shapes and suspect it interferes with the worm's energy-producing metabolic pathways. Repeated cycles of UV-induced paralysis actually killed some of the worms. Unsurprisingly, news of this worm stun-gun led to longing for Star Trek-style phasers, and the scientists, though skeptical, were good sports about it. As lead researcher Neil Branda said tactfully:

"I'm not convinced there's a legitimate use of turning organisms on and off in terms of paralysis, but until somebody tells me otherwise, I'm not going to say that there isn't an application" [BBC News]

. But while phasers remain a fantasy, light-activated materials certainly have a future in medical research.

Light-activated drugs could be used to activate tumour-killing drugs once they reach a particular location in the body. Similar chemicals have been used before, but have required a steady supply of light – often harmful UV bandwidths – to stay active. The new compounds, known as diarylethenes, could be more useful because they can be switched on and off with a single light pulse, Branda says [New Scientist]