Space Heaters in Caves Could Protect Bats From Mysterious Disease 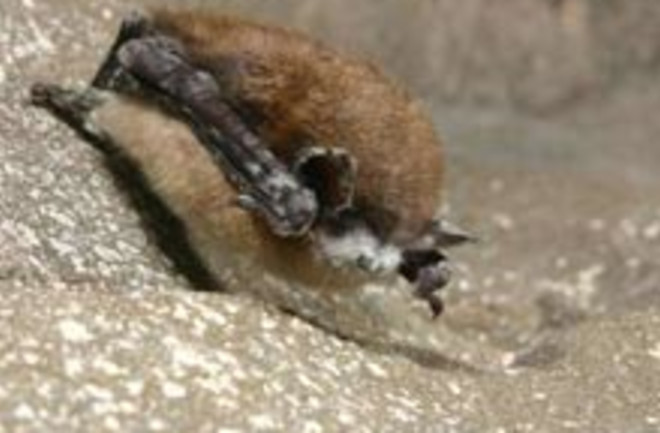 With the cause of a rampantly deadly bat illness still unknown, biologists have no solution to the problem but have proposed at least a quick fix that may be able to slow it down. At least half a million bats throughout the northeast United States have died from white-nose syndrome (WNS), a fungal infection that was first observed only two years ago. The fungus is thought to grow on bats' facial skin and flight membranes, possibly causing them to starve. No one knows where the fungus came from, or if it is what is directly killing the bats. But in caves where it has been observed, bats have suffered morality rates ranging from 75 to 100 percent [Scientific American]. With the cause of the fungus not yet determined, researchers worry about the fate of bats, which play an important role in controlling the populations of insects that can damage wheat, apples and dozens of other crops [AP]. While it won't solve the problem, a temporary stop-gap is now being considered that would place battery-operated heated boxes inside bats' hibernation caves, and may give the animals the energy they need to fight off, or at least survive, the fungal infections [Scientific American]. The idea is based on the fact that the bats with WNS appear emaciated, as if they've starved to death during their winter hibernation; researchers theorize that  afflicted bats rouse from hibernation more often than normal bats and thus burn more fat to stay warm [AP]. When they temporarily stir, the bats' body temperature and metabolism spike. To test how the heated box tactic might work, biologists Justin Boyles and Craig Willis created computer models to look at how disrupted hibernation patterns may have created the high mortality rate caused by WNS. They then added artificial warming zones within hibernation caves.... In the model, the bats that were provided with additional heat were able to retain enough energy to fight the fungal infection, and survival rates increased by up to 75 percent [Scientific American]. The researchers' proposal, published in Frontiers in Ecology and the Environment, will be tested initially in Manitoba, Canada, far from the affected area so as to avoid any risk of accelerating the spread of the disease. Researchers emphasize that the measure is not a solution, and note that there are potential problems with a mass deployment of heaters that go beyond the logistics and cost. Willis concedes that such an intervention could backfire if white nose is spread from bat to bat in the summer, since it would prolong the survival of infected bats. But.... given the magnitude of the problem, it makes sense to at least test the hypothesis [AP]. Related Content: 80beats: Bats Are Dying From White Nose Mold, But Researchers Don’t Know Why 80beats: Bats’ Lungs Burst When They Fly Close to Wind TurbinesImage: Al Hicks/NY Department of Environmental Conservation