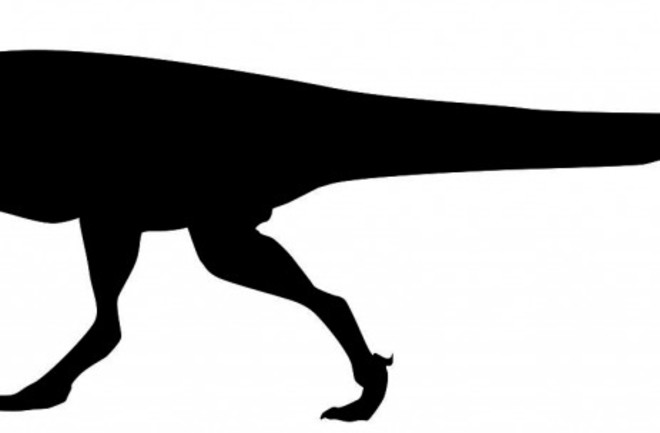 Known so far only from its giant footprints, a new Southern African mega-carnivore is believed to be the region's largest dinosaur predator ever. (Credit Fabian Knoll and Lara Sciscio) My, what big feet you have...200-million-year-old dinosaur footprints found in the mountainous Southern African country of Lesotho are unique within the Southern Hemisphere and the largest of their kind ever discovered on the continent. But size isn't the only thing that matters about the mega-carnivore that made them. The footprints, each measuring about 22 inches in length, were discovered on a layer of rippled, fine-grained sandstone dated to about 200 million years ago. The ripples and other features preserved in the rock suggest it was once part of a seasonal watering hole or edge of a river channel. Other tracks from smaller theropods — bipedal, typically carnivorous dinosaurs — were found around the mega-carnivore's trackway. Based on what we know about theropod proportions from fossil skeletons, the size of the Lesotho footprints suggests the mega-carnivore was about 30 feet long and as tall as ten feet at the hip. Okay, that's not as big as the most famous theropod, 40-foot-long (or so) T. rex, but it is big enough to ruin the day in a bitey way for pretty much anything else in the neighborhood.

University of Manchester paleontologist Fabien Knoll provides some scale beside the impressive mega-carnivore footprints described today. (Credit Fabian Knoll)Lower Jurassic Park Aside from finding such a large theropod so far south in Africa (famously big and bitey theropods such as Carcharodontosaurus and Spinosaurus are well known from the northern half of the continent), what's exciting about the new mega-carnivore is how old it is. Carcharodontosaurus and Spinosaurus are both Cretaceous critters, but this guy is about twice as old. I say "this guy" because researchers have tentatively named whatever made the trackway Kayentapus ambrokholohali and I'm too lazy to keep typing that knucklebuster of a species name over and over. Kidding. K. ambrokholohali is not an official species yet, given the whole habeas corpus thing about formal classification: For now, "Ambro" is technically an ichnospecies, known only from trace fossils (which in this case is the trackway). Sidenote: "Ichnospecies" is a fantastic word to have in your back pocket the next time you play Hangman or Scrabble if you want people to find you insufferable. Back to Ambro. The theropod lived during the Early Jurassic, aka Lower Jurassic, a time when dinosaur populations in general were recovering following the mass extinction that marked the end of the Triassic Period, about 201 million years ago. While the end-Triassic isn't as well-known as the end-Cretaceous (very bad, especially for dinosaurs that weren't birds) or the end-Permian (very, very bad for everybody), it was pretty rough, and wiped out about three-quarters of species around at the time. Other theropods found from this earliest of the Early Jurassic tend to be fairly small, with the largest maxing out at about 18 or 19 feet. Paleontologists have found a theropod track, about the same age and almost as large as Ambro's prints, in Poland. That suggests there may have been large carnivores tromping about Northern Hemisphere in the Early Jurassic. But no one would expect a theropod the size of Ambro to be out and about, especially in Southern Africa, at the time. Based on skeletal fossils, we thought theropods in general underwent a big bulk-up in body size only millions of years later in the Jurassic Period. The Embiggening There have been a few theories about why carnivores may increase in size following an extinction event. A mass die-off can wipe out a lot of the predators' competition, for example. Other post-extinction event changes in local ecosystems, such as changes in temperature, aridity or vegetation, may, at the same time, create an environment for the carnivores' prey to thrive and get bigger both in terms of individual size (more meat!) and population (more opportunities to catch that meat!). Still, the sheer size of K. ambrokholohali's tracks, laid down so soon after the end-Triassic (geologically speaking), suggests that mega-carnivores were around much earlier than we thought, perhaps because they survived the extinction event unscathed or found the environment that emerged in its wake a perfect opportunity for growth. Ichnospecies Ambro makes its debut today in PLOS ONE.

The mountainous Southern African country of Lesotho, seen on the horizon, is home to some of the continent's most intriguing dinosaurs. (Credit G. Tarlach)