It isn’t easy being a loner — but in the slime mold world, natural selection could favor it. Populations wouldn’t survive without those who depart from the herd. 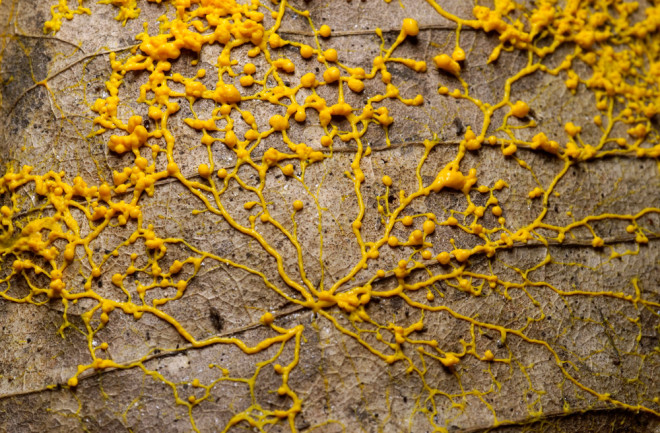 But where there’s a crowd, there are usually a few individuals that hang back — they’re known as loners. Researchers have tended to dismiss these outliers as mistakes, but a new study reveals that for amoebas that normally come together to form slime molds, being a loner is actually heritable.

Slime molds — creeping blobs found in soil and on decaying tree stumps — begin their lives as populations of single-celled amoebas. As they divide, the bacteria they eat eventually run short. To avoid starving, the amoebas perform an incredible trick: They clump together to form a mushroom-shaped tower, complete with a stiff stalk and a cap. The cells at the top of the cap release starvation-resistant spores that can travel to new locations by sticking to insect bodies.

But not every cell goes the social route. Corina Tarnita, an evolutionary biologist at Princeton University, was watching a video of slime molds amassing at a workshop when she first noticed the loners. “Because [slime molds] have such an amazing collective behavior, everyone focuses on that,” she says, so videos are often too low-resolution to capture cells outside of the aggregate. But in this video, they were crystal clear. “It struck me that there was this amazing coordination process happening and, at the same time, there seemed to be some cells that were just not responding at all.”

The speaker at the workshop chalked the nonconformers up to a fluke, but Tarnita wasn’t satisfied. She wondered if there was something more to the loners — if they might constitute an alternate strategy for slime molds.

To learn more about the mysterious loners, Tarnita and her team studied three different genetic strains of social amoeba as they formed groups on wet dishes in the lab. When they counted the cells under a microscope, they found that each genetic strain had its own consistently sized population of loners, indicating that loner behavior — or at least the propensity to decide whether to be a loner or not — is a heritable trait. They published their findings last month in the journal PLOS Biology.

“Some individuals are just more likely to be loners than others because of their genetics or other hereditary components,” says Fernando Rossine, a graduate student in Tarnita’s lab and co-author on the paper. The fact that lonerism is inherited means it could be favored by natural selection, he adds.

That may seem counterintuitive, since the loners are bound to die without producing spores if they run out of food. But if food suddenly returns, the loners are in luck — they get another chance to eat and divide and their progeny can join future aggregates. Meanwhile, cells that have coalesced into a mushroom-shaped tower can’t take advantage of the food because their physical transformation prevents them from eating.

There’s another downside to group behavior: It’s vulnerable to cheaters that reap the benefits of their neighbors’ labors without contributing. If too many cheaters infiltrate the group, the whole social system breaks down.

Read more: Meet the Animals That Get Ahead By Cheating

Slime mold cells can cheat by forcing other cells to join the stalk of the tower and suppressing their ability to produce spores, while still reproducing themselves. Groups can also get invaded by predatory cells that eat their neighbors rather than join with them.

Because the loners are not vulnerable to these cheaters and predators, Rossine says they might serve as an insurance policy. “In the end, [loner behavior] gives the whole population resiliency against cheating.”

In fact, Tarnita believes the existence of loners could shed light on a question that evolutionary biologists have long puzzled over: How can cooperation persist in the face of cheaters? “The loners could be a really interesting way of saving the social behavior,” she says. “They preserve its potential,” because they can still produce social offspring.

The researchers also discovered that the potential loners don’t decide to stay back by flipping an internal coin; rather, it depends on how many other cells have joined the social group. “They become loners by listening in on everyone’s social conversation. It’s a social decision,” says Tarnita, who sees parallels with the widespread social isolation taking place to curb the spread of coronavirus.

“Right now, we’re all social loners, not because we’ve made the decision that we’re introverts, but because we’ve collectively decided that what’s best for society right now is for us to stay as loners,” she says.