Single Gene Explains How the Rooster Lost His Penis 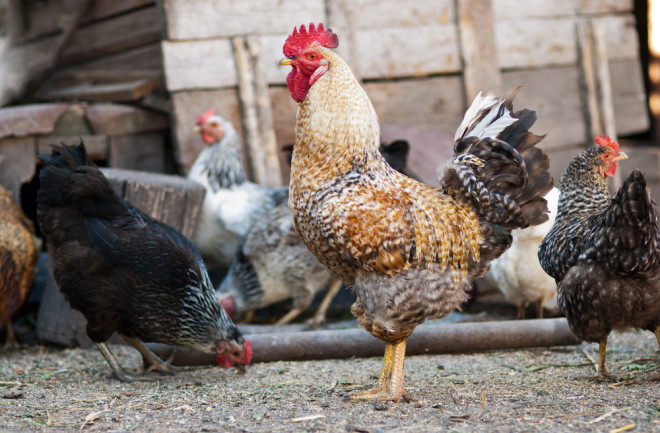 Things are awkward in the avian locker room. While waterfowl like ducks can proudly strut their stuff, the rooster—that emblem of virility—probably keeps a towel wrapped firmly around his waist. Unlike the rooster’s well-endowed aquatic counterparts, he has a ridiculously small penis.

Given the chicken’s agricultural importance, scientists long knew that, like 97% of bird species, roosters didn’t have a significant penis—at least, not one large enough to deliver semen deep inside a female’s reproductive tract. And a new study published today in Current Biology found that the activity of a single gene is enough to literally dis-member a chicken’s penis during embryonic development.

Martin Cohn, a biologist at the University of Florida, and colleagues tried to solve the mystery of the missing chicken penises by studying the embryonic development of chickens and comparing it to the development of waterfowl, emus and crocodiles. Previous research had focused on the growth and development of mammalian penises, and Cohn believed that the same genes might be at work in our feathered friends.

The researchers focused in on bone morphogenic protein 4 (Bmp4), which other studies had shown to be active in early embryonic development in a variety of species. Very early in development, the male genitalia of both chickens and ducks looks similar—both species form a small bump called a genital tubercle from which the penis forms. But whereas the duck phallus continues growing after day 9 of development, researchers discovered, the chicken phallus stops growing and then begins to shrink.

Staining of the chicken genital tubercle revealed increased cell death. Cohn and colleagues then measured the expression of Bmp4 along with several related genes. In the developing chick, the researchers found high levels of Bmp4 expression along the length of the tubercle. In ducks, Bmp4 was only active at the base of the tubercle.

When the researchers inhibited Bmp4 expression in the developing chicken phallus, the tubercle didn’t disappear like in normal development—it kept developing, like in a duck. And when Cohn and colleagues switched on this gene in ducks, the tubercle cells began to commit suicide similar to what happens in chickens. Further genetic analysis showed that phallic Bmp4 activation evolved in chickens only after they split from waterfowl. These results fit in with a variety of other studies that show Bmp4 plays a crucial role in the evolution  and diversification of birds, as it has been shown to affect beak size, feathers and toothlessness.

So, if roosters don’t have a penis, how do chickens have sex? (I’m told inquiring minds want to know). They use what’s called the “cloacal kiss,” where male and female chickens press the openings of their cloacas together and the sperm transfer happens. Sounds foreign to us mammalian types, maybe – but it’s a system that’s been working for birds for millions of years.

Image by Kemeo via Shutterstock