And maybe some new species, as well. 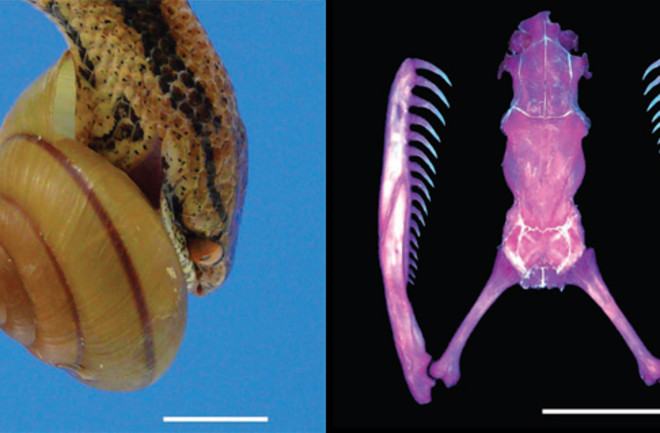 In the novel Dr. No, the titular villain explains to James Bond that he once survived an assassination attempt because his heart was in the wrong place. The good doctor had a condition called situs inversus – his organs were mirror images of their normal versions, found on the opposite side of his body. His heart, being on the right, was unharmed when his would-be murderer stabbed the left side of his chest. Having a mirror-image body can be useful when someone’s out to kill you and while that’s true for criminal masterminds, it also applies to snails.

In Japan, Satsuma snails have shells that mostly coil in the same direction. If you put your finger in the shell’s centre and follow the spiral outwards, you would probably move in a clockwise circle. And Iwasaki's snail-eating snake knows it.

The snake, as its name suggests, eats snails and both its body and behaviour are beautifully adapted to prise these animals from their defensive shells. A clockwise shell (known as a ‘dextral’ one) sits on the snail’s right side, so the snake stalks from the left. It grabs the shell with the upper jaw and sticks its lower one into the gap (see above left).

Both sides of the lower jaw can move independently, and by shifting them back and forth in turn, the snake slowly ratchets the snail out of its fortress. But shells that spiral anti-clockwise (‘sinistrals’) protect the part of the snail that the snake attacks. They are much tougher to break into and the snake fails to switch its attack plan by striking from the opposite side.

Not only that, but its equipment falls short. Its lower jaws are full of wicked, backwards-pointing fangs for hooking into snail flesh, but it has around a dozen more of these on the right side than the left (see above right). That’s great for attacking snails with clockwise dextral shells, but less so for those with anti-clockwise sinistral ones.

Masaki Hoso from Tohoku University thinks that this advantage explains why the sinistral snails are still around, and it may even lead to the two populations splitting into separate species, according to the coil of their shells. Why? Because shell shape doesn’t just determine a snail’s chances of fending off snakes, it affects their sex lives too.

The Satsuma snails mate face-to-face. Every animal has both male and female sex organs and when a pair lines up, they harpoon each other with their respective penises. All of this relies on them having their equipment on the same side and that, in turn, depends on the spiral of their shells. There is no position in the Satsuma snail Kama Sutra that will allow a dextral and sinistral snail to mate. Amazingly, a single gene controls the way the shell spirals – one version creates a dextral snail and the other creates a sinistral.

Over time, the less common version should lose out. Dextral snails are in the majority, so a dextral snail would have a far larger supply of mates than a sinistral one. They should eventually outcompete their minority rivals, driving them and their genes to extinction. That is, unless having a sinistral shell has some sort of benefit that outweighs the difficulty in finding a suitably shaped sexual partner – a benefit like snake resistance.

In a series of feeding experiments, Hoso found that dextral snails always died at the jaws of Iwasaki’s snail-eater, while seven out of eight sinistral snails survived. What of the snakes? They never changed their behaviour to deal with their mirror-image prey. It’s possible that ‘left-handed’ snakes with their own mirror-imaged bodies will eventually appear to take advantage of the sinistral snails. But no such animals have ever been found. With so many species of snail available, and most of them being dextral, it’s more likely that the snakes would just swap to a different menu.

At least six other species of snake – all members of the aptly named ‘slug-eaters’ – attack snails in the same way. By looking throughout Japan, Hoso found that where these snakes are found, the sinistral Satsuma snails have a stronger presence (see below left). As the sinistrals gain a foothold, they should start to split away from their dextral cousins. Members of the two groups can’t mate with one another, so their genes are effectively isolated within their own kind. They are free to evolve in their own independent directions, even though they may live in the same place.

Hoso found that this has already happened. He sequenced the DNA of all of Japan’s Satsuma species and built a family tree that shows their evolutionary relationships. The tree clearly showed that sinistral species have evolved from dextral ones on at least six different occasions (see below right).

The same thing has happened throughout the world. The majority of snails are dextral, but sinistral forms have evolved time and time again. In at least four of these events, this reversal was driven by a change in a single gene. This change may be simple, but its consequences are vast. In a virtual instant, you get a group of snails that are adapted against their predators and separated from members of their own species, free to evolve down their own path.

Hoso thinks that such events are examples of the “hopeful monster” idea coined by a geneticist called Richard Goldschmidt, where small genetic changes could bring about very large evolutionary ones.

All images and videos courtesy and copyright of Masaki Hoso.

More on the origin of species:

And apropos of nothing, here is a video of Isabella Rossellini, of all people, enacting snail sex. I found this while doing some of the background research for this piece and I can’t scrub it out of my mind. NSFW, obviously.