Discriminating butterflies show how one species could split into two

Walk through the rainforests of Ecuador and you might encounter a beautiful butterfly called Heliconius cydno. It's extremely varied in its colours. Even among one subspecies, H.cydno alithea, you can find individuals with white wingbands and those with yellow. Despite their different hues, they are still the same species... but probably not for much longer.

Even though the two forms are genetically similar and live in the same area, Nicola Chamberlain from Harvard University has found that one of them - the yellow version - has developed a preference for mating with butterflies of its own colour. This fussiness has set up an invisible barrier within the butterfly population, where traits that would typically separate sister species - colour and mate preferences - have started to segregate. In time, this is the sort of change that could split the single species into two.

Heliconius butterflies defend themselves with foul chemicals and advertise their distasteful arsenal with bright warning colours on their wings. The group has a penchant for diversity, and even closely related species sport different patterns. But the butterflies are also rampant mimics. Distantly related species have evolved uncanny resemblances so that their warnings complement one another - a predator that learns to avoid one species will avoid all the ones that share the same patterns. It's a mutual protection racket, sealed with colour.

The result of this widespread mimicry is that populations of the same species can look very different because they are imitating different models. This is the case with H.cydno - the yellow form mimics the related H.eleuchia, while the white form mimics yet another species, H.sapho.

How can we be sure that the pairs of butterflies that look alike aren't in fact more closely related? For a start, scientists have shown that the frequencies of the yellow and white versions of alithea in the wild match those of the species they mimic. Genetic testing provides the clincher. It confirms that the two mimics are indeed more closely related to each other than they are to their models.

Genetics also tells us how alithea achieves its dual coats. Colour is determined by a single gene; if a butterfly inherits the dominant version, it's white and if it gets two copies of the recessive one, it's yellow. Pattern is controlled in a similar way by a second gene. These variations aside, there are no distinct genetic differences between the two alithea forms. They are still very much a single population of interbreeding butterflies. 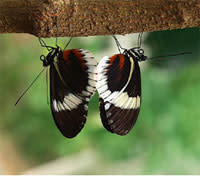 But that may change, and fussy males could be the catalyst. Chamberlain watched over 1,600 courtship rituals performed by 115 captured males. Her voyeuristic experiments showed that yellow males strongly preferred to mate with yellow females, although white males weren't so fussy.

This isn't just a whimsical preference - Chamberlain thinks that the colour gene sits very closely to a gene for mate preference. The two genes may even be one and the same. Either way, their proximity on the butterfly's genome means that their fates are intertwined and they tend to be inherited as a unit. That's certainly plausible, for the same pigments that colour the butterflies' wings also serve to filter light arriving into their eyes. A change in the way those pigments are produced could alter both the butterfly's appearance and how it sees others of its kind.

To see what happens when this process goes further, you don't have to travel far. Costa Rica is home to another H.cydno subspecies called galanthus, and a closely related species called H.pachinus. They represent a further step down the road that alithea is headed down. Galanthus and H.pachinus look very different because they mimic different models - the former has white wingbands reminiscent of H.sapho, while the latter has green bands inspired by H.hewitsoni. 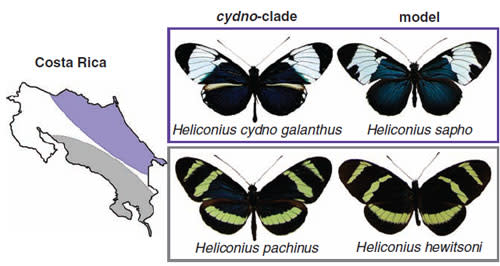 Nonetheless, the two species could interbreed if they ever got the chance. Two things stand in the way. The first is geography - H.cydno galanthus stays on the eastern side of the country, while H.pachinus remains on the west. The second is, as with alithea, sex appeal. Males prefer females bearing the same wing colours as they do so even if the two sexes of the two species were to cross paths, they'd probably fly right past each other.

Genetically, these species have also diverged far further than the two forms of alithea have. They differ at no less than five genes involved in colour and pattern, two of which are practically identical to the ones that causing alithea to segregate. They also provide more evidence that the genes for colour and mate preference are closely linked, for crossbreeding the two species yields offspring with half-way colours and half-way preferences.

These butterflies are by no means the only examples of speciation in the wild. In this blog alone, I've discussed a beautiful case study of diversity creating itself among fruit flies and parasitic wasps, explosive bursts of diversity in cichlid fish fuelled by violent males, and a giant predatory bug that's splitting cavefish into isolated populations.

But Heliconius butterflies may be the most illuminating of all these case studies. They're easy to capture, breed and work with. And as Chamberlain's study shows, they can marshal together the contribution of experts in genetics, ecology, evolution and animal behaviour in an effort to understand that most magnificent of topics - the origin of species.

[This post was written as an entry for the NESCENT evolution blogging contest. For more details about this competition, visit their website.]