Frozen lakes can sound like laser guns in the fall and spring, when cracks send sound waves bouncing through them. But they’re not the only singing landscapes you can find. 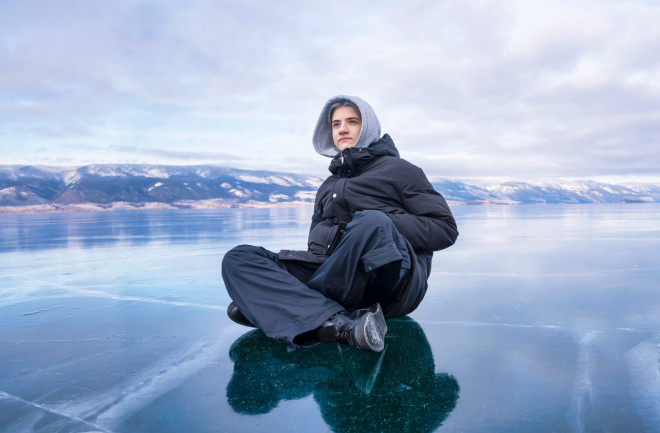 Anyone who’s seen Star Wars will probably recognize that characteristic “pew pew” of a laser gun. Starting out high-pitched before rapidly dropping low, it’s both a very distinct and very unnatural sound. But you may be surprised to learn that if you drop a hydrophone in a frozen lake right here on Earth, you can hear what sounds like the Battle of Hoth.

This is singing ice, and the way it works is deceptively simple. Simply put, no medium propagates sound like water. It’s how whales can sing to one another across even vast distances and why phenomena like “the Bloop” can be heard 2,000 miles apart across the Pacific.

When cracks and fractures form in a sheet of ice (often because of significant temperature changes, so spring and fall are the best times to hear it), they release energy in the form of vibrations. Those vibrations cover a range of frequencies, from high to low. It’s similar to the Doppler effect, which happens because sound waves bunch up as they approach you and spread apart as they move away. The closer the waves are to each other, the higher the pitch — and vice versa.

But in ice, the high-frequency sound waves propagate faster; hence that high tone right at the start that rapidly drops in pitch. The high-frequency vibration hits your ear first, with the low-frequency tone right on its heels. You can actually recreate the phenomenon yourself by skating over thin ice and forming fractures as you go, becoming a one-person, Star Wars laser gun-wielding band.

But singing lakes, it turns out, are just the tip of the iceberg.

Vera Schlindwein is a professor of seismology at the Alfred-Wegener Institute for Polar and Marine Research in Germany. For her doctoral thesis, she wrote about the phenomenon of singing volcanoes: As magma flows up through a volcano, it rubs and flexes against the sides, creating vibrations that blend together into one harmony. When she first encountered it, she initially blamed instrument failure. But when all her instruments produced the same harmony, Schlindwein knew she was onto something.

The difference between a song and a sound is simple, she explains. Sounds generally cover multiple frequencies. On a spectrogram, they “look like a bulge.” Songs, on the other hand, have distinct frequencies that repeat. Dragging a hand carelessly over a guitar at no particular pace creates a vague noise, for example, but plucking individual strings in repeating patterns creates harmony.

Around 2005, while working at the seismological observatory on the Neumayer Base in Antarctica, Schlindwein’s colleagues brought her some interesting hydroacoustic readings. Appearing to originate from an iceberg, they were eerily similar to the volcanic songs she’d studied for her thesis.

Schlindwein and her colleagues assumed the same mechanism would explain both phenomena: fluid pressure. Perhaps, in the case of the icebergs, this pressure came from water flowing through crevasses. Later research, however, revealed that the icebergs only sang when they had contact with the ground or with each other. Now, Schlindwein says, it appears more likely that the songs originate from tiny “earthquakes” produced when the icebergs make this contact.

Like sticking a playing card in a bicycle’s spoke, the rubbing produces a rhythmic sound that, when fast enough, becomes difficult to resolve into individual noises — blending into one harmony. And, depending on how fast the tide moves the icebergs around, the sound might change pitch or even become, according to Schlindwein, a “horrible sound, like static on your radio,” if it gets going too fast.

The key to making nature sing is having a repeating source process, she says. And this plays out in other things besides volcanoes and ice.

Putting a Finger on the Pulse of the Earth

Unfortunately, from a funding perspective, uncovering the source of these songs doesn’t tell us much that’s practical about icebergs or volcanoes. Any useful information they do provide can generally be more easily gleaned in other ways, Schlindwein says, from satellite imagery to simple observation.

But Schlindwein, having kept an ear open to them throughout the course of her main research, has found the phenomenon more widespread than she ever imagined. Hydrothermal vents produce harmonic tremors as well, and Mother Nature can even turn human-made objects into instruments.

Schlindwein discovered, for example, vortexes forming around the ropes that are attached to underwater seismometers so they can be retrieved. Strong currents split around the rope and, like a river being diverted by a stone, wrapped back around in a vortex. And just as those vortexes are stable, so too are the vibrations produced by them, creating harmonic tremor. Telephone wires, she says, can produce the same effect in a strong wind.

Now, Schlindwein is part of an upcoming, multidisciplinary effort to study the Aurora vent field, a slow-spreading mid-ocean ridge dotted with hydrothermal vents and permanently covered in ice. The researchers will place ocean-bottom seismometers a few miles below the sea’s surface. For Schlindwein, the yearlong expedition is a chance to do more holistic research and contribute to the still-young field of environmental seismology, “where one uses these kinds of accidentally produced motions to get information about climate change, about how distant storms travel and produce waves,” she explains.

That makes the scope of this experiment very exciting. “With this one experiment,” Schlindwein says, “I can feel my hydrothermal source, see vents and magma moving. I can see the ice on top moving and doing something over the year, maybe losing its stiffness,” and its ability to suppress wave formation.

“Having such an experiment under the ice is that much more exciting,” she says. “I can have my finger right on the pulse of the Earth.”