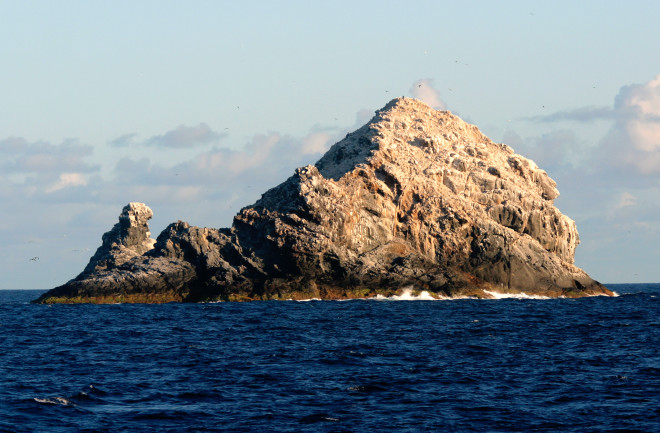 These pointed rocks, also known as the Gardner Pinnacles, are all that’s visible of what many experts now consider the world’s largest volcano. (Credit: Noaa)

This article appeared in the January/February 2022 issue of Discover magazine as "The Tip of the Volcano." Become a subscriber for unlimited access to our archive.

About 600 miles northwest of Honolulu, in the middle of the Pacific Ocean, two small pinnacles poke out of the sea. To an observer, the 5 acres of rock known as Pūhāhonu might seem insignificant, except as a landing pad for weary seabirds. But their presence suggests the existence of something much bigger beneath the surface: what many experts are now calling the largest single volcano on Earth.

The volcano's exposed tip is about a sixth of the Eiffel Tower's height. (Credit: Maxx-Studio/Shutterstock)

New seafloor mapping of the Papahānaumokuākea Marine National Monument revealed Pūhāhonu’s full size. Michael Garcia, a volcanologist at University of Hawai’i at Mānoa, and his colleagues found that the mostly submerged volcano contains at least 35 cubic miles of rock, according to a study published in 2020 in Earth & Planetary Science Letters. That’s roughly double the volume of Hawaii’s Mauna Loa, the previous record-holder for largest shield volcano on the planet. At its widest point, Pūhāhonu, which means “turtle surfacing for air” in Hawaiian, spans a remarkable 170 miles.

The long-defunct volcano lies along the Hawaiian-Emperor Chain, a string of more than 120 volcanoes that stretches for over 3,700 miles across the Pacific Ocean. Large, broad volcanoes like Pūhāhonu and Mauna Loa produce hot basalt lava flows. Typically, these erupt at temperatures of around 2,100 degrees Fahrenheit. But by examining the minerals erupted from Pūhāhonu, Garcia found that its lava was closer to 3,000˚F. That would make the volcano’s lavas the hottest to erupt on Earth in the past 65 million years.

A wave in the mantle plume that feeds the volcano likely contributed to Pūhāhonu’s immense size and extreme temperature. Nearly 2,000 miles beneath our feet, hot material rises from the boundary between the Earth’s mantle and core, melting as it nears the surface. The study authors suggest that a wave of hotter material in the plume that reached the surface around 12 million years ago melted more of the mantle, producing more — and hotter — lava. These pulses from the Hawaiian Plume, recorded through measurements of Pūhāhonu’s size and composition, might offer important hints about what’s happening at the boundary with the Earth’s core as our planet cools internally.