Scientists are working to pinpoint the ocean’s last quiet places — and hush certain loud ones. 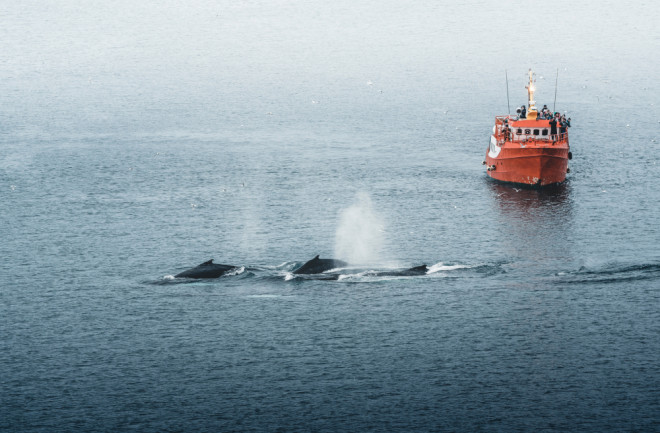 In a small boat off the lush coast of Bali, Indonesia in 2017, marine scientist Rob Williams lowered an underwater microphone called a hydrophone into the blue-green shallows to record something that’s becoming exceedingly rare: an ocean free of human-generated noise.

Williams is one of dozens of scientists around the world involved in what he calls “acoustic prospecting” to map the elusive spots that remain quiet, as well as noisy places that might benefit from practices that can hush the waters. That’s why he carefully tuned in to the subsurface sounds within Bali’s tropical shallows.

Noise can directly harm ocean animals, too: many use it to “see" in areas where light is limited underwater, since sound can travel hundreds of miles. Whales, fish, invertebrates and even plants like seagrass use acoustic cues to find food, reproduce, navigate and avoid predators.

As a result, noise pollution threatens sea creatures whose survival depends on sound. A cacophony of human noise now reverberates through our oceans, from ship propellers and sonar to mining explosions and oil and gas drilling. Even aircraft can be heard underwater at levels that trigger behavioral changes in marine animals. “For a whale, chronic noise pollution is analogous to what clearcutting a forest does to the spotted owl," says Williams, who co-founded the nonprofit Oceans Initiative with his wife and fellow researcher, Erin Ashe.  "It destroys their habitat.”

In Bali, Williams and his colleagues partnered with local scientists from Udayana University and Conservation International Indonesia to use six hydrophones to record noise levels for a week during Nyepi, a religious day of silence. It’s observed before the Balinese new year and shuts down all commercial activities for 24 hours, including boat, air and car traffic. Williams’ research documented a 6-decibel (dB) decrease in anthropogenic noise during the holiday compared to the three days before and after it. This drop increased the amount of communication space for marine animals 16-fold, he estimates, which significantly improved their habitat quality.

Indeed, Williams clarifies that a word like “quiet” might actually be a misnomer when describing the ocean’s vibrant soundscape. Without human-generated noise like the nails-on-chalkboard whine of a tanker ship, our seas are chock-full of natural sounds. During Nyepi in Bali, Williams’ hydrophones captured coral reef fish singing in a dawn chorus, and the click and moan of sperm whales and dolphins chatting with each other.

Scientists have also measured other ocean spots where noise pollution was suddenly halted. Acoustic recordings taken in the North Atlantic following the terrorist attacks on September 11, 2001 (when shipping and air traffic slowed considerably) also showed a 6-dB decrease in overall background noise, particularly in the low-frequency range whales use to communicate. The same study documented that the levels of stress hormones secreted by endangered right whales in the Bay of Fundy dropped as the ocean quieted. Their findings show that low-frequency ship noise may be associated with chronic stress in whales.

The COVID-19 pandemic and corresponding lockdowns also slowed maritime traffic, leading scientists to dub 2020 the 'Year of the Quiet Ocean.' Based on data recorded from 231 hydrophones positioned off of five continents, ocean noise pollution declined significantly worldwide during the spring of 2020. These data were collected as part of the ongoing International Quiet Ocean Experiment, an effort launched in 2015 to map sea soundscapes.

A study in New Zealand found that the reduction in ocean noise due to COVID-19 immediately increased the communication ranges of dolphins and fish by up to 65 percent. And a hydrophone installed deep beneath Monterey Bay, California also revealed a 4- to 5-dB drop in low-frequency sound in the spring and summer of 2020.

Now, Oceans Initiative is partnering with National Geographic’s Pristine Seas project to provide scientists around the world with hydrophones to map ocean soundscapes.

In the Pacific Northwest, Williams and his colleagues have used underwater acoustic maps to protect key habitats for orca (also known as killer) whales. Since orcas are group-hunting predators who communicate to locate and ambush prey, noise pollution can starve them.

These maps helped local communities and policy-makers in British Columbia create sound sanctuaries (no-wake or no-boat zones) near beaches where northern resident orcas congregate. Plus, the Port of Vancouver offers incentives for shipping vessels that slow speeds to reduce noise through the ECHO Program, such as reimbursing vessels for the extra transit time.

Underwater acoustic maps may also inspire similar policies to protect the southern resident orcas that live in Haro Strait, which sits between Vancouver Island and Washington State. This group of whales is critically endangered — only 74 individuals remain. Williams has demonstrated that southern resident killer whales are losing up to 90 percent of their communication opportunities during a high-traffic day in Haro Strait.

This spring, Washington state's government approved funding for Quiet Sound, a collaborative program aimed at reducing large commercial vessels’ disturbances to killer whales. This is the first ocean noise reduction initiative in the United States, and will tie in with Canada’s ECHO Program.

“Silence really is golden,” Williams says. “We are running out of time to protect the last acoustic refuges in the ocean.”