It's the second eruption from Etna this year. 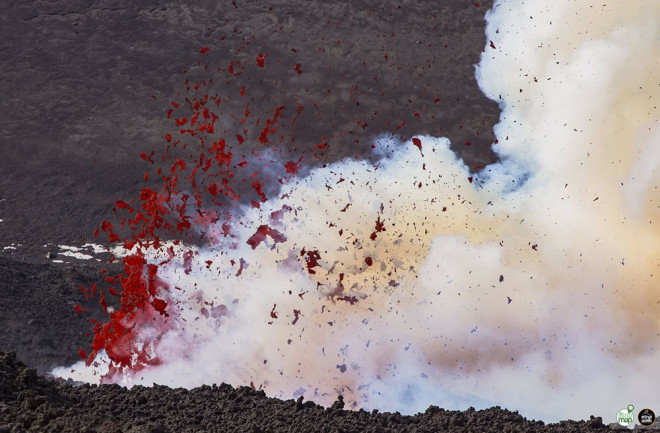 Spattering lava during the recent eruption at Etna in Italy, seen on May 30, 2019. (Credit: Giuseppe Distefano, used by permission)

On Sicily’s western coast, the volcano Etna decided to bring the heat for the start of summer. After a fairly quiet few months, the volcano roared back over the weekend with explosions, new fissures and long lava flows. Etna watchers will be keeping on eye on the volcano to see if this is the start of a set of major eruptions like we saw in 2013.

This is actually the second significant eruption from Etna this year. Back in February, the volcano produced lava flows that covered over 1 cubic kilometer (~250 acres) up on the southeast flank of the volcano. This was followed by some ash and splattering lava from 3 vents near the summit in May — signs that new magma was definitely very near the surface.

You can see how impressive this eruption was in this video by Giuseppe Distefano (@etnawalk). The sound from the eruption can be heard in the distance. The lava is actually quite sticky, meaning that it’s quite likely of the a’a variety, made up of quick-flowing, stickier material.

These lava flows reached 2-3 kilometers from their sources over the course of a couple days. Video of the eruption show the Strombolian explosions (more or less, big bubbles of lava popping at the vent) and the long, narrow lava flows snaking downslope from the new fissures.

A volcanophile peers down at a small lava flow on Etna from an older flow levee on June 3, 2019. (Credit: Giuseppe Distefano, used by permission)

You could even spot the eruption from space, where the dark grey ash plume from the eruption spread eastward towards the Mediterranean.

Sentinel 2 image of Etna, showing the dark grey plume from the new eruption. The white are clouds over the summit of the volcano. (Credit: ESA)

Luckily, these eruptions are not much of a threat to the people of Sicily and because the eruptions haven’t been highly explosive, there has not been any disruption to air travel to the island. By June 3, much of the activity had tapered, but as many people who follow Etna closely know, the volcano’s activity can rise and fall quickly. You can keep track of the activity on one of the several webcams pointed at the volcano by the Osservatorio Etna.