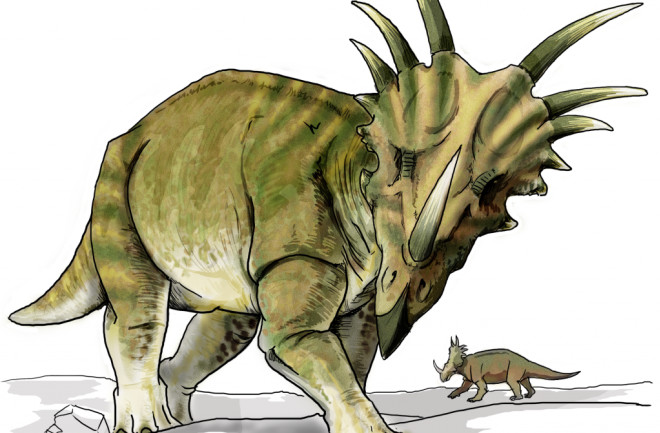 Sexual signaling back in the day was as subtle as today's Axe body spray: "Do I make you horny, baby?" asks Styracosaurus, whose marvelous multi-horn display is among the most elaborate of the ceratopsians. (Credit Wikimedia Commons/LadyofHats) Triceratops to potential mate: "Hey baby, check out my frill and big horns...you know what they say, big horns, big everything, awwwww yeahhhhh..." Apparently, that's how hook-ups went down in the Mesozoic, at least for the famously horned and frilled ceratopsians. Paleontologists have long debated the purpose of the animals' elaborate headgear, but a study out today, based on a new approach, says the animals' fabulous flair was all about the sexy time. The ceratopsians, one of the most successful of the dinosaur gangs, are also among the most famous in paleontology today, largely due to their show-stopping bony bling. Even the early members of Ceratopsia, such as Liaoceratops, sported modest frills and cheek spikes. And as time and evolution went on, the group's frills, horns, spikes and other assorted pointy bits became ever more ostentatious, culminating in Late Cretaceous lookers such as Regaliceratops, Wendiceratops, Spiclypeus and Machairoceratops. But why? After all, there were plenty of comparatively homely, no-frills herbivores who got along just fine without all the bells and whistles.

Spiclypeus shipporum, a Late Cretaceous ceratopsian rocking more ornamentation than a Christmas Tree — apparently all for love. (Credit Mike Skrepnick) Over the years, researchers have suggested a number of hypotheses to explain the elaborate ornamentation. One notion, popularized in extra cheesy movies, held that the horns could be used for fighting*, and the frill as a kind of shield for the neck. (*Clip not scientifically accurate...everyone knows cowboys never wore stripey red wrap-tops.) There is some research to suggest that at least a few of the animals got into a scrap now and then, either with a predator or another member of the same species, perhaps tussling for the same mate. But most paleontologists believe the frills and spikes and horns were not used for fighting, or even mere defense. For a great explanation why, check out a 2010 paper that's open-access (scroll down to "Testing Mechanical Hypotheses/Defense" if you don't have time to read the whole thing, though I recommend you do, and be sure to look at Figure 3, which showcases many of the most blingtastic ceratopsians).

In the last few years, the two most popular theories offered up to explain all the ornamentation among ceratopsians boil down to species recognition or sexual signaling. Species recognition is exactly what it sounds like: letting other animals know visually what you are so that they can consider you a potential mate or think "whoa, not my type" and mosey along. The concept of sexual signaling is also pretty straightforward. It's the equivalent of saying "I am quite a catch. You'd be a fool to pass me by, baby." Though I do not recommend you say this. Ever. Show Me The Sexy To test which theory was more plausible, researchers performed what they're calling "the first ever evaluation of species recognition in a fossil vertebrate clade." Sounds fancy, sure, but it gets to the heart of the matter: Paleontologists don't know for certain what ceratopsians used their horns and frills for because it's extremely difficult to determine an animal's behavior from a bunch of bones. So the researchers behind today's study began their quest by building a data set of all known ceratopsian species (77 in total), their geographic territory, timeframe and traits — not just the characteristics of their fancy frills 'n' such, but all documented traits, including internal anatomy. From there, they calculated, based on shared and disparate traits, how closely related each species was to another, evolutionarily-speaking. During the process, they also cut species that were "poorly known," described from very few remains.

Chasmosaurus belli, one of the species analyzed in today's research. (Credit Wikimedia Commons/Nobu Tamura) That left the team with 46 ceratopsians to analyze. Each species was then compared with the others, one at a time, in more than a thousand pairings. From this pair-based comparison, the team identified 38 species pairs that overlapped both geographically and temporally. Why was it so important to identify which ceratopsian species shared space with other ceratopsians? Well, because the whole idea of species recognition is that animals grazing the same field or slurping from the same watering hole need to know who is of their kind and who isn't. Hybridization can result in sterile offspring and other negative consequences, which in evolutionary terms is lousy ROI (return on investment). So the thinking behind today's study is that sympatric ceratopsians — closely-related species found in the same location at the same time — had the most to gain from evolving ornamentations that were distinctly different from each other. The researchers' results: "We find no support for the hypothesis that sympatry correlates with higher ornament divergence in ceratopsian dinosaurs." In other words, if the choices were species recognition or sexual signaling and you find no support for species recognition, well then, it's got to be sexual signaling. Right? Welllllll, maybe. As I noted above, it is really tough to determine behavior based only on fossils, and paleontologists have flubbed it in the past (See: poor, misunderstood Oviraptor and, well, pretty much any depiction of dinosaurs older than a half-century or so, though truth be told current paleontology is almost certainly getting some stuff wrong as well.). One wrinkle to today's findings is that the bulk of sexual signaling studied in the modern animal world (the imperfect but currently best analog we have for dinosaur behavior) involves sexually dimorphic species. For example, male peacocks flaunt showy plumage to signal their hotness to the females (technically not peacocks at all, but peahens), which are considerably less showy. (Across the animal world, females are often "cryptically colored" to blend in better with their surroundings to protect themselves and their young.) There is no strong evidence yet, however, that ceratopsians, or any other dinosaurs, were sexually dimorphic. Like I said, living animals offer an imperfect basis for recreating dinosaur behavior, but right now it's all we've got. Does that mean today's conclusions are wrong? Nope. But it's not yet time to make them canon. It is time, however, to keep digging. I hit only the highlights here, but if you're feeling sympatico with sympatry, check out today's study, which appears in Proceedings of the Royal Society B: Biological Sciences.