Regaliceratops, Wendiceratops: The Ones With Looks That Frilled

Their distinctive displays weren't for fighting, though. 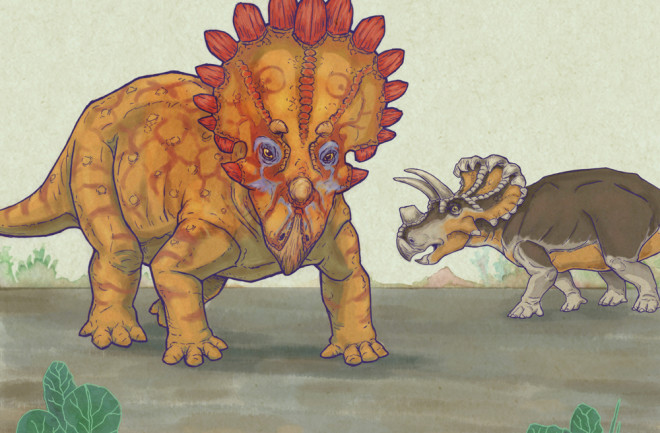 Thanks to comparatively plentiful fossils, ceratopsids — horned and frilled dinosaurs with rhinolike bodies, such as Triceratops — are among the best-studied dinosaurs. But there are still surprises to be found.

Consider the 68-million-year-old, nearly complete skull of Regaliceratops peterhewsi, found in southwestern Alberta, Canada and described in Current Biology in June. The dinosaur has a unique frill that Royal Tyrrell Museum paleontologist Caleb Brown, part of the research team, says one fan on social media likened to “looking like the animal ripped the plates off a Stegosaurus and used them to adorn itself.”

Wendiceratops pinhornensis, also from Alberta and described in PLOS One in July, has its own distinctive display: an elaborate assemblage of massive horns and a frill with dramatic, curving hooks. Paleontologists have found scores of bones from at least four individuals at a single site. The 79-million-year-old “new” dinosaur, which grew to about 20 feet long, is considered one of the earliest species of ceratopsids ever found.

Contrary to popular belief, the animals did not use their fabulous frills and horns for fighting or defense. Says Brown: “The display is a billboard that says something like, ‘I’m an impressive male of Species A, and I see you’re also Species A. We should herd together.’ ”