Secrets of the Teeth 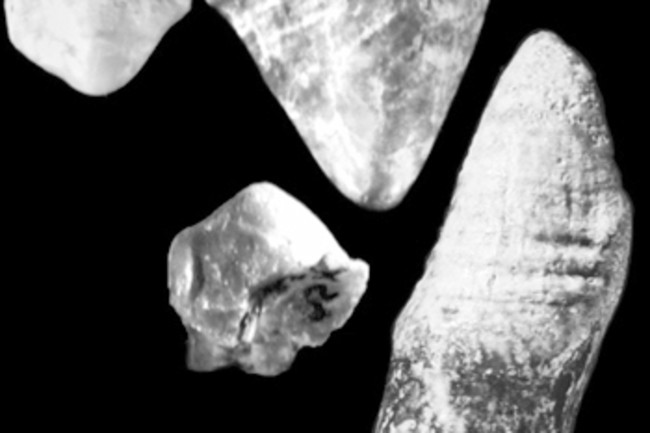 Probing the origins of humanity is actually a lot like being a dentist. The bones of our hominid ancestors tend to fall apart, leaving behind a smattering of shards. But teeth, made of enamel, can do a better job of withstanding the ravages of time. And teeth--particularly those of mammals--are not just tough but interesting. Mammals--us included--have several kinds of teeth, each of which is covered with distinctive bumps, cusps, and roots. All those details vary from one species to another. So even if you find a fragment of a tooth, you may be able to figure out what species it belongs to. And if you have enough teeth to compare to each other, you can probe some pretty profound questions about where we came from. A fascinating paper about hominid teeth was published today, but the few newsreports I've seen so far have missed the real story. For many decades, scientists tended to see human evolution as a steady, linear march of progress from quadrupedal, small-brained ape to bipedal, big brained Homo sapiens. When they found a previously unknown species of hominid, they tried to find where along the line from primitive to advanced it fit in. Neanderthals seemed to fall in just before modern humans. "Lucy"--better known as Australopithecus afarensis--seemed to fall in just after our common ancestor with chimpanzees. But then things started to get confusing. In the fossil record, Neanderthals don't grade smoothly into Homo sapiens. In fact, anatomically modern humans existed at least 160,000 years ago, and Neanderthals became extinct only 30,000 years ago. It's more likely that they were two distinct species. Meanwhile, paleoanthropologists found species that seemed distinct from Lucy some 3 million years ago. Even at the very earliest stages of hominid evolution, five to six million years ago, at least three highly distinct species seemed to coexist. Hominid evolution was looking less like a straight line and more like a bush, with branches shooting off throughout hominid evolution. Because our branch happens to be the one still left on Earth, we fooled ourselves into thinking that we were the product of linear progress. Tim White has never bought this line. White, a paleoanthropologist at the University of California at Berkeley, has carried some of the greatest work on human evolution. (Among other things, he found those 160,000 year old Homo sapiens.) White has argued that simply finding some differences between hominids that lived at the same time doesn't always indicate a vast diversity of hominids. He has maintained that with so few fossils of really old hominids, we simply don't have a big enough sample to draw any hard conclusions. We don't know which traits in a given fossil were new features in their evolution and which were hold-overs from primitive ancestors. The hominid family tree could be bushy, or it could be more like a Charlie Brown Christmas tree, with a few scant branches. No one could say. That's where the teeth come in. White and some of his long-time coworkers (Yohannes Haile-Selassie of the Cleveland Museum of Natural History and Gen Suwa of the University of Tokyo) have been studying some extremely old fossil remains from Ethiopia for years now. Some of the bones belong to a small-brained, possibly bipedal species called Ardapithecus ramidus, which lived some 5 million years ago. In 2001, they found some older teeth, dating back 5.2 to 5.8 million years ago, that they initially thought might belong to a subspecies of A. ramidus. But in Science today they reported that the teeth are different enough to belong to a species of its own, which they call Aradapithecus kaddaba. They had distinctively long canines, it appears, and had a bite pattern more like chimps than later hominids (including A. ramidus). At first this discovery might seem to add yet another branch to the bushy tree of hominid evolution. But Haile-Selassie, Suwa, and White argue otherwise. They found some significant similarities between A. kaddaba and the two other hominids known from the same period, Orrorin and Sahelanthropus. They even propose that all three species should be lumped together in the same genus, in the same way chimpanzees and bonobos are lumped together. It's even possible that they all belong to the same species. In other words, what seemed like bushy branches at the very base of the hominid tree should be pruned down to a single trunk. Perhaps there's something to the march of progress after all. Your teeth have secrets of the ages embedded in them. So be sure to floss daily. Update: Friday 3/5/04 9:40: Kate Wong in Scientific Americangets it.