Good hearing and smell made Llukalkan aliocranianus a predator to be reckoned with. 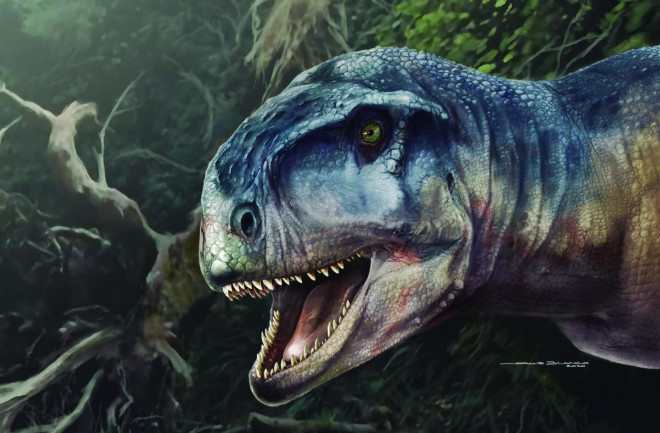 An artist's impression of what Llukalkan aliocranianus may have looked like. (Credit: Jorge Blanco/Journal of Vertebrate Paleontology)

Some 85 million years ago, “the one who frightens” roamed ancient Patagonia, delivering powerful bites to prey unlucky enough to cross its path.

Llukalkan aliocranianus was a medium-sized theropod dinosaur roughly the same shape as a Tyrannosaurus rex. The only known specimen of the ancient carnivore was discovered in November 2015 in Argentina’s Neuquen province. “It was a fortuitous case; lucky, basically,” says Federico Ghianechini, a paleontologist and biologist with the Argentina National Scientific and Technical Research Council and the first author of a study published recently in the Journal of Vertebrate Paleontology.

The discovery, which occurred in a region rich in other fossils dating from the same period, adds to our knowledge the area's ancient ecosystem in the Cretaceous period.

Ghianechini and his colleagues were near the end of their field season in Neuquen in 2015 when they saw part of the fossil protruding from the ground.

“We started to excavate more and we saw there were more bones,” says Ghianechini. The fossils ended up being all part of the head, including pieces of the jawbone containing teeth and a relatively well-preserved brain case.

The head was similar in some ways to other theropods, a group that includes fellow giant predators like Tyrannosaurus rex. The teeth are serrated, suggesting that the animal was adept at tearing through the flesh of its prey. Victims may have included other smaller theropods like ornithopods as well as crocodilians, turtles and herbivorous dinosaurs.

“Without doubt, the bite would have been very powerful,” Ghianechini says.

Llukalkan aliocranianus may also have been an adept listener. One of the carnivore's bones had special air-filled sinuses in the middle-ear not found in other theropods from the same family. The adaption may have allowed it a greater hearing range. Beyond that, it's also likely that the creature had a sharp nose.

“This dinosaur possibly had a keen sense of smell, which in combination with its hearing capacities, would have given it great advantages as a predator,” Ghianechini says.

This particular specimen would have been a medium sized theropod, says Ghianechini, measuring about 5 meters long from head to tail, based on the cranium size. But based on some of the morphology of the tear duct, the researchers also believe the animal might have been a juvenile.

But Stephanie Drumheller, a paleontologist at the University of Tennessee not involved with the project, says it’s difficult to tell how old the theropod actually was without seeing any vertebrae, which typically begin to fuse with age, or longer bones from elsewhere in the body. “This probably is a juvenile, but until we all find more specimens, it’s hard to see where it falls,” she says. “It would have been a big, impressive animal.”

Ghianechini says that the researchers did find some theropod vertebrae near the specimen in subsequent digs. Their size is such that they would match with the cranium, but the fossils were far enough away that the researchers can’t say for sure whether the bones are from the same individual.

The first part of the dinosaur's name, Llukalkan, translates roughly to “the one who frightens,” or “the one who causes fear” from Mapuche, an indigenous language and group in Patagonia. The second part of the name, aliocranianus, translates from Latin to mean the “other cranium.”

While the name may seem to lack imagination, the distinction is important because this species is the second theropod found in the area in recent years. Viavenator exxoni dates roughly to the same period of the Cretaceous as Llukalkan, and is only a little larger than the latter.

Both species are likely abelisaurids, a family of theropods typically found in the global south during the Cretaceous. Their potential coexistence indicates that the two large predators likely divvied up their prey in the area, similar to the way that leopards and lions do in parts of Africa today, Ghianechini says. “When you have multiple predators living in the same place, they usually try to partition food so they’re not butting heads,” Drumheller adds.

She also notes that, together, the two species are part of a large explosion of dino-discoveries coming out of Patagonia in the past two decades. These species represent “a completely different suite of animals” when compared to well-known dinosaurs in the northern hemisphere. “It’s a cool study,” she says. “There are still lots of new dinosaurs that have yet to be discovered.”