Scientists Are Vacuuming Animal DNA Out of the Air

An imaginative new technology could revolutionize the study of biodiversit and help save endangered species. 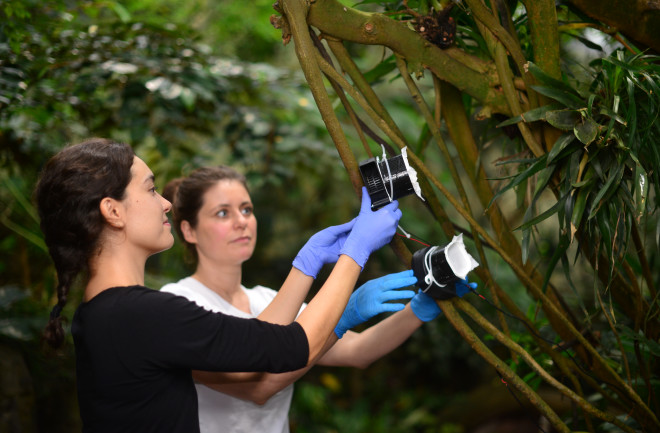 Kristine Bohmann has a habit of using unconventional means to gather data. She once offered herself as bait to leeches in Madagascar, hoping to find in their guts the genetic traces of the animals they had been feeding on. If you want to know what species frequent an area, this leech approach reveals some information that simply looking for them cannot. But wouldn’t it be nice to skip the bloodletting?

Now Bohmann, an associate professor of evolutionary genomics at the University of Copenhagen, has developed a less medieval method of finding animals: Vacuuming their DNA out of the sky. Based on her team’s first experiments with the technology, it may turn out to be as practical as it is fanciful — using air filters to capture genetic material, they detected dozens of captive and wild species in and around the Copenhagen Zoo. “The robustness of that,” she says, “makes me insanely excited and enthusiastic to go into nature and try this.”

Unbeknownst to all involved, a separate group of researchers from Queen Mary University of London simultaneously built their own DNA vacuum back in 2020. After discovering the coincidence of similar research efforts, both teams opted to publish their findings together. The two papers, published last month in Current Biology, serve as proof of concept for a tool that could revolutionize biodiversity monitoring and improve ecological decision-making. “We’ve demonstrated this can work, and it can work extremely well,” says Elizabeth Clare, a professor of biology at York University in Toronto, who led the British study. “What we now need to figure out is under what conditions does it work.”

Genes in the Wind

The air around us is 78 percent nitrogen, 21 percent oxygen and, surprisingly, some teeny fraction of a percent DNA. Living creatures are constantly “shedding” bits of their genomes into the environment, through saliva, skin, feces, fur, feathers and more. By themselves these are excellent hints for establishing the “who’s who” of an ecosystem, but the microscopic particles wafting from them could prove even more useful.

Over the past couple decades, an entire genre of research has sprung up around “environmental DNA,” as it’s called. Whereas human observers and camera traps require a physical animal in the right place at the right time, eDNA “is much more like a footprint,” Clare says. “It gets left behind, and it lasts much longer.”

Genetic material has been extracted from rain, soil and even honey. Bodies of water have been especially handy for surveying both aquatic and terrestrial populations. But for some reason, the burgeoning field has overlooked the stuff we breathe.

Air, as a medium for DNA research, is at once appealing and daunting. It’s everywhere, so easy to sample, yet so enigmatic and irregular. At the Hamerton Zoo Park, where Clare conducted her tests, she regularly picked up DNA from enclosures hundreds of yards away. One prolific lemur appeared almost everywhere. But another species of lemur never showed up once, even when she vacuumed right beside it.

Still, judging by her and Bohmann’s expectations, the experiments were wildly successful. At the start, the investigators were all but certain of complete failure (both received their funding from high-risk grants for implausible technologies). Instead, they found the whole menagerie. Giraffes, tigers, armadillos, ostriches — 49 species in Denmark, and 25 in England, detected in both sealed enclosures and open air. They even detected evidence of fish that were only used as feed for other animals. “It was just absolutely mind blowing,” Bohmann says.

The two groups used substantially different methods, which suggests that collecting airborne DNA is much easier than anyone predicted. At best, they expected to see genetic markers of a couple nearby species. When Clare realized she’d caught the signal of an endangered European hedgehog, outside the zoo, she was stunned. “This is what the next experiment should be: Can we actually detect animals in the wild?” she says. “The answer is, we already did.”

That fluke highlights the promise of DNA vacuuming, which could more effectively map the habitat of threatened and endangered species — data that government agencies can use to defend the creatures against encroachment. In England, aquatic eDNA has helped save the great crested newt. “If we can adapt that for hedgehogs,” Clare says, “that’s hugely exciting for British conservation.” On another front of the environmental struggle, it could also alert scientists to the arrival of invasive species long before they spread enough to show up in traditional surveys.

Its impressive debut aside, the technology is shrouded in unknowns and open-ended questions. How far does DNA disperse through the air? How long does it linger after an animal moves on? How does weather affect it? Does the way genetic material accumulates vary between the rainforest and the prairie? Does the size or abundance of an animal influence its detectability? For now there are no obvious answers to these questions, and on the last point the two papers actually disagree.

Nevertheless, the pioneers of DNA vacuuming consider it a promising start. As future work sheds light on the uncertainties, and as researchers optimize sampling techniques for different ecosystems, they’re confident it will earn its place in the toolbox of biodiversity studies. “I hope it’s going to be the method to rule them all,” Bohmann jokes, “but I think it's going to be more like we have to figure out how it complements other methods.” Even leeching will probably retain its place in the repertoire.

The unusual circumstances surrounding the publication of these papers only bolster the technology’s potential and intrigue. “The power is that we have the perfect scientific replication,” Clare says, “because we didn’t even know we were replicating each other.” Either experiment could have stood alone as a statement of DNA vacuuming’s value, but right out of the gate it has double the empirical support. Together, as Bohmann put it, “We’re strengthening each other’s message.”