Revelations in the Rainforest Canopy

A daring treetop experiment is yielding key insights into the fate of sensitive rainforest plants as air pollution rises. 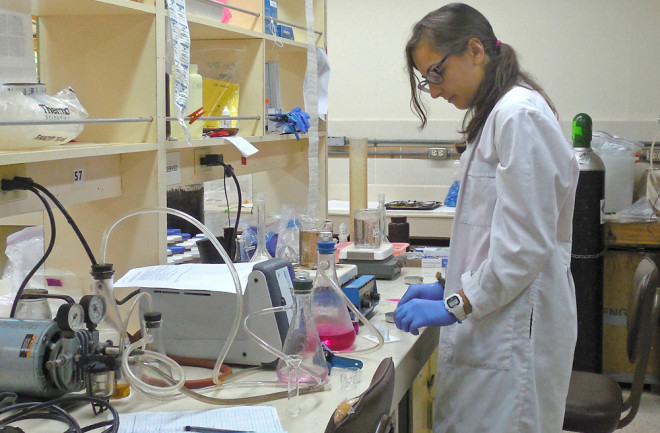 Lindsay McCulloch processes samples in the La Selva lab. The team hopes to glean insights into what the future holds for this ecosystem. (Credit: Carrie L. Woods)

Wiping sweat from her face, ecologist Catherine Cardelùs inches her way up a massive tree in the Costa Rican rainforest, pushing aside tangled vines as she climbs through the understory. Her rope disappears into the thick green above. Thirty minutes later, abdominal muscles screaming, she reaches the canopy and swings her leg over a giant branch 110 feet above the ground.

The tree limb she’s straddling is thick with epiphytes — plants that grow on other plants — and they’re the reason she’s come to this dizzying study site at the La Selva Biological Station in northern Costa Rica. Epiphytes, which support many of the canopy’s wildlife and plants in one way or another, live at the interface between the atmosphere and the rainforest. That makes them especially vulnerable to increasing air pollution. Cardelùs, of Colgate University in Hamilton, N.Y., and her longtime co-researcher, Carrie Woods, want to know how two pollutants in particular — nitrogen and phosphorus — will affect epiphytes. What they find may also offer insights into how the rest of the rainforest will respond to a more polluted world.

“I consider these guys kind of the canary in the coal mine,” Cardelùs says.

Despite its distance from the ground, the canopy is home to about one-third of all rainforest species. Making a living in the treetops is tough; the plants and animals here coexist in a precarious equilibrium, relying on each other for food and sometimes shelter. Epiphytes are linchpins in this aerial ecosystem: Monkeys feed on them; dragonflies lay eggs in them; and the water-filled base of epiphytes called bromeliads form nurseries for developing tadpoles. Trees with epiphytes stay cooler and lose less water.

“There’s an entire ecosystem up here,” Woods says from her branch a few feet above Cardelùs, pointing out the various bromeliads and ferns sprouting from every available surface. Some leaves are an inch long; others are measured in feet. Woods has counted 65 species of epiphytes in a single tree, each one vying for nutrients and space in a highly complex and competitive system. Cardelùs suspects that nitrogen and phosphorus pollution may upset the interactions between canopy-dwelling species.

“We have more people on the planet, and when you have more people, you have more cars, more industries, more buildings, more stores, and all of that leads to more pollution,” says Woods. At a certain point, too much nitrogen can harm ecosystems, often by changing the chemical makeup of the soil; the threat varies greatly depending on the habitat, and researchers are still trying to understand where those thresholds are, she adds.

But how do you study the impacts offuture pollution? Cardelùs devised an unusual experiment that, in effect, brings the future to the present. For the past five years, Cardelùs and Woods have added pollution to a handful of trees in the rainforest surrounding the La Selva station. Just like you’d first test a new stain remover on an inconspicuous part of your favorite jacket, the researchers want to test how an influx of nutrients will affect epiphytes, effects that Cardelùs predicts will preface changes throughout the rest of the forest.

A Lab in the Canopy

Cardelùs remembers the first time she climbed a tree and realized the vastness of the epiphyte community. “I looked at a branch, and I had an entire other forest,” she says, “and I thought, ‘Holy cow, how does this function?’ ” Since 1997, she’s climbed hundreds of trees in Central and North America as well as Ethiopia. Woods is equally obsessed. From another branch, she gestures toward a toucan. “When you’re up here, you’re living the rainforest life,” Woods says. “Nothing is better.”

But life in the rainforest — and all of Earth’s forests — is likely to change as pollution deposits excess nutrients in the soil and air. Studies on nutrient deposition have primarily focused on the Northern Hemisphere. There, rising nitrogen levels decrease forest biodiversity. But it’s unclear whether rainforests — home to the bulk of the world’s biodiversity — will follow the same trend.

Enter Cardelùs’ experiment in reading the future. During the five-year study, which was the first to examine the effects of projected pollution levels on the rainforest canopy, local field assistants climbed each of 10 trees at La Selva every couple of weeks — five each from two tree species, Virola koschnyi and Lecythis ampla. They hand-sprayed rainwater solutions containing nutrients onto the surface of five different branches, exposing each branch to a different treatment. One received normal rainwater; two were sprayed with a solution containing either 50 percent more nitrogen or phosphorus; another received both nutrients; and the last branch was partially covered to mimic less rainfall. Every summer during the study, which concluded in 2014, Cardelùs, Woods and a team of students spent countless hours suspended in midair, cataloging and sampling hundreds of epiphytes and the canopy soil they grow in.

Given that epiphytes, like all plants, need nitrogen and phosphorus to survive, it’s tempting to think it could help them thrive. But just as with wine, you can have too much of a good thing. “If one group of plants is better at handling nutrient addition and they grow faster and reproduce faster, what will that mean to the other plants that can’t compete as well?” asks Cardelùs.

Since epiphytes are cut off from the rich pool of forest floor nutrients, each species has to extract what it needs from the air, rainwater and scant canopy soil, with hundreds of plants tapping into the same 1-inch acidic layer that forms from decomposing organic material. “There’s less soil and less resilience up there to handling changes in nutrient deposition,” Cardelùs says. She fears the canopy diversity will eventually decrease.

Lessons from the Soil

Zipping back down from the canopy to the ground, leaf and soil samples carefully stashed in backpacks, the researchers head to the lab. They tease out the twigs and debris from the compostlike soil. Back at Colgate, the team analyzes the samples for enzyme activity, microbe abundance, and nutrient content and availability. Fungi and bacteria are responsible for cycling nutrients, and in canopy soil, fungi tend to dominate. But this soil shows something different. In the nutrient-treated branches, bacteria have taken over, which is usually a sign that more nutrients are available in the system, Woods says.

This change in microscopic organisms could have big impacts. “We’re shifting the entire functional composition of the soil, and there’s going to be upper-level effects that we haven’t even seen yet,” she says. The researchers are still working through the thousands of samples they’ve collected, so they can’t say exactly what those effects will be yet — but they’ll know before the worst pollution takes hold, giving them a sneak peek of the future.

“We know a lot about the canopy ecosystem, but we still don’t know very much,” Cardelùs says. After all, it’s not the most accessible workplace. With so many unknowns, the danger, she says, is that in polluting the atmosphere, we are tampering with interactions we don’t fully understand.

This article originally appeared in print as "Up in the Air."