More than half a century after Neanderthals were first found at the site, researchers discover another skeleton there. 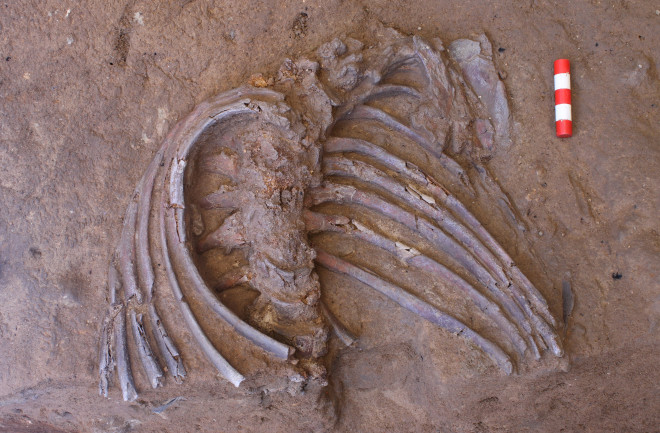 Ribs and spine of a Neanderthal skeleton emerging from the rock in Shanidar Cave. (Credit: Graeme Barker)

Even more than Germany's Neander Valley, which gave Neanderthals their name, Shanidar Cave evokes the lost world of our closest evolutionary kin, when they were active humans, with their own traditions and social bonds, rather than scattered bones and artifacts.

Shanidar gave us the first glimpse into who Neanderthals were.

Excavations began in the middle of the 20th century at the site, located about 60 miles northeast of the city of Mosul in the Kurdish region of Iraq. The digs turned up 10 skeletons, including the remains of two infants. Dating methods were considerably less precise at the time, but the range established for the remains was from roughly 50,000 years ago to a mere 35,000, representing the twilight of their kind.

(If I seem to be waxing poetic about Shanidar, blame Jean Auel. Like many '80s kids, I read The Clan of the Cave Bear and other titles from her Earth's Children series, which was inspired by finds at the cave. Dramatic embellishments aside, the books had many of us skipping the mall and instead hitting the library to learn more about Neanderthals.)

Pollen found on one of the skeletons, as well as the apparently intentional placement of several of the bodies, prompted archaeologist Ralph Solecki to declare that Neanderthals performed mortuary practices, including placing flowers on their dead.

In addition, the adult male skeleton known as Shanidar I, who died around the age of 40, had survived a blow to the head and other injuries as a child that likely would have left him unable to function without help. The fact that he lived to a ripe old age implied that Neanderthals cared for the sick and frail members of their group.

Fifty-plus years ago, such ideas were shocking. They went against the conventional thinking at the time that Neanderthals were incapable of complex cognition or behavior. After all, this was decades before DNA revealed just how similar to us Neanderthals were.

Subsequent research has challenged a number of Solecki's conclusions — in 1999, for example, one study suggested the pollen around Shanidar 4 may have been deposited there by an industrious rodent. But the cave and its occupants remain central to what science can say about Neanderthals.

Now, for the first time in decades, a new team of researchers has discovered — much to their surprise — another Shanidar Neanderthal.

Flattened by thousands of years of sediment and rock fall, the Neanderthal skull in situ in Shanidar Cave, Iraqi Kurdistan. (Credit: Graeme Barker)

Fresh rounds of digging at Shanidar were set to begin in 2014, but activity in the area by the Islamic State group scuttled the idea. A year later, researchers were able to reopen the area where Solecki's team had found most of the remains.

The goal of the new project was not to find more Neanderthals. Instead, it was to apply modern archaeological methods for more precise dating of the fossils and potential reconstruction of the site's paleoenvironment, including climate.

The team soon found additional bones, however, which they determined belonged to one of the partial remains uncovered in the 20th-century digs.

The cave yielded an even bigger find beginning in 2017, when a rib cage and right hand with bones still in place, or articulated, emerged from the layers of rock. In subsequent years, the team also recovered a mostly complete but crushed skull and additional bones.

The remains were found very close to where Solecki's team uncovered Shanidar 4, the individual found with pollen.

Analysis of the 11th Neanderthal will continue for years, but writing about the discovery in Antiquity, researchers already know several details about the remains.

Preliminary dating suggests the individual died 60,000 to 70,000 years ago. The researchers note that the close proximity of the remains to Shanidar 4 and other Neanderthals at the site could mean their modern dating methods will reveal all of them are considerably older than previously thought.

Based on tooth wear, the individual appears to have been at least middle-aged, if not old, at time of death. Because most of the remains were found in place, researchers determined the body was placed on their back, with head and shoulders raised on a triangular stone slab like a pillow. The individual's head tipped to the left, resting on their left hand, which was curled.

Illustration of the possible burial position of the new Neanderthal remains from Shanidar Cave; the stone behind the head is shown in gray. (Credit: Emma Pomeroy)

The researchers have identified plant material in the sedimentary rock immediately above the bones. Analysis currently underway to determine what the material is, and when it was deposited, may reveal whether it was placed intentionally.

Based on the position of the body, its proximity to other individuals at the site, and placement in what appears to be an artificial depression, the researchers believe the remains were deliberately buried.

We'll learn much more about the new Shanidar discovery in the coming years, but it is already informing the discussion about when members of the genus Homo may have developed mortuary practices.

And there's more news from the cave: Additional material that may represent yet another new Shanidar Neanderthal, potentially the 12th to be found at the site, has been identified but left in place for future excavation.