When Did Ancient Humans Begin to Understand Death?

Our unique awareness of mortality may have evolved before we did. 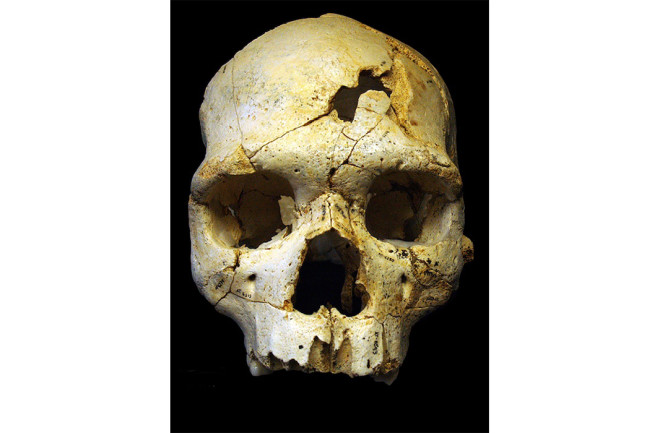 A pair of lethal skull fractures stand out on a 430,000-year-old skull from Spain’s Sima de los Huesos. The site may be home to the oldest evidence of funerary practices. (Credit: Van Leeuwen, E.J.C. et al. 2017 Scientific Reports)

The dead lay in a cave, over a quarter-mile from daylight. Investigators counted remains from at least 28 individuals. The bones were fractured into nearly 7,000 pieces, mixed with bear fossils and mud — and a 6-inch, teardrop-shaped handaxe.

DNA analysis identified the individuals, dated to approximately 430,000 years ago, as early Neanderthals — our evolutionary cousins — or their ancestors.

The site, northern Spain’s Sima de los Huesos, is humanity’s oldest cold case. Some researchers say predators, mudslides, accidental falls or other natural processes brought the bodies there. But others contend the corpses were deliberately interred, raising the question of whether they are the earliest evidence of funerary customs.

We already know a good deal about such behavior in historical times: Various cultures have buried, burned, bejeweled or mummified their dearly departed, as survivors wept, danced, feasted, fasted or even commissioned costly monuments. These rituals “are really all about keeping the memory of a deceased person alive, maintaining that connection,” says University of Arizona archaeologist Mary Stiner.

All that fuss over the fallen sets Homo sapiens apart from other animals. But when, in human evolution, did the living become concerned with the dead?

For decades, Durham University archaeologist Paul Pettitt has studied sites of possible funerary rituals. Based on this work, he’s concluded that what we recognize today as funerary customs evolved over time from humbler behaviors, including those seen in other animals.

In 2018, building on previous research, Pettitt proposed a four-step process to define how these customs developed. The first step was detecting death chemically: We know that hundreds of millions of years ago, organisms evolved the ability to sense necromones, molecules emitted by decaying corpses. Passed down to today, this trait has allowed animals, from insects to humans, to protect themselves from hazards associated with carcasses. For example, ants will eat, bury or drag away dead colony members before they fester.

The next evolutionary step was “when emotions [were] introduced,” says Pettitt. Certain lineages of smart, social creatures came to grieve the passing of group members. Examples today include corvid birds like magpies squawking alarm calls while gathered around corpses, or elephants attending to dying group members and returning to death sites to touch skeletal remains.

Our closest relatives, chimpanzees, grieve in a variety of ways. After a wild chimp fell fatally from a tree, primatologists witnessed its group members holler, slap the ground, rip up vegetation, throw rocks and embrace one another. In a different case described in a 2017 Scientific Reports paper, after a group gathered quietly around a dead juvenile, the mother used a grass stem to clean its teeth.

Researchers have observed a range of reactions to death among chimpanzees. Here, a female (right) cleans the teeth of a deceased male — which she had adopted — with a piece of grass while her female offspring looks on. (Credit: Van Leeuwen, E.J.C. et al. 2017 Scientific Reports)

A 2018 review of these behaviors concluded that, with experience and age, the apes learn death is final: Dead individuals will not wake. But there’s no indication they understand its inevitability — that all animals, including themselves, will die. “Whereas we, fortunately or unfortunately, are aware of it,” says study author James Anderson, a primatologist at Kyoto University. “That may be one of the cognitive differences between us and [other] great apes.”

Pettitt agrees, and thinks this awareness led to the evolution of the third in his four-stage process: mortuary behavior that’s exclusive to hominins (humans and our closest archaic relatives). Conscious of mortality, our ancestors developed ways to ease death’s emotional toll, particularly funerals and burials in specific places. These practices probably began simply, like placing bodies in a pit.

Over time, different cultures devised diverse, elaborate customs, wrapped into religious beliefs about an afterlife. Burials packed with artifacts suggest our ancestors reached this fourth and most advanced stage of funerary behavior by the Upper Paleolithic, a period that began about 50,000 years ago. For example, a pair of Upper Paleolithic graves in Russia contained full skeletons of two boys and a middle-aged man buried with spears, figurines and an additional femur bone that was filled with red pigment. The bodies were adorned with over 13,000 mammoth ivory beads.

Just when hominins transitioned from animal-like grief to the mortuary behavior exclusive to our lineage remains unknown. For example, there are some burials older than the Upper Paleolithic graves in Russia, but “they’re not very spectacular,” says Stiner.

Stiner is referring to approximately three dozen skeletons in caves scattered across the Middle East and Europe. The sites are 40,000 to 120,000 years old, and the bodies were placed, without meaningful grave goods, in shallow pits beneath areas where hunter-gatherers lived intermittently.

The motivations behind these burials are unclear. It may have been hygienic housekeeping, keeping decomposing bodies out of sight, out of smell.

In a 2017 Biological Theory paper, Stiner suggested that the fact bodies were buried in caves used repeatedly as campsites meant the living wanted to stay connected with the dead. These were “places to which they clearly came back to again and again,” she says. Digging graves in domestic spaces was “people’s attempt to bridge life and afterlife.”

Also significant: Some of the sites with graves contained H. sapiens, while others held Neanderthals. (No single site had both human types.) This suggests concern for the dead and death may have evolved independently in both lineages — or that it evolved even earlier, with their common ancestor.

Before these Eurasian burials of Neanderthals and H. sapiens, however, hominin finds are mostly scattered, weathered bones — a partial femur here, a jawbone there — picked over by carnivores and preserved by chance.

There are two spectacular exceptions — which brings us back to the cold case in Sima de los Huesos, and a second site, the Dinaledi chamber in South Africa’s Rising Star cave system. The remains at each location come from different species and times: While the 430,000-year-old Sima hominins belonged to the Neanderthal lineage, the 15-plus individuals in Dinaledi — about 230,000 to 330,000 years old — are members of the species Homo naledi, first described in 2015.

Yet the similarities are uncanny. At both sites, skeletons were scattered about a cave chamber that’s virtually inaccessible, nearly 10 stories underground. The only entry point for either site is a roughly 40-foot vertical chute — and to reach that from the surface, one must first navigate craggy, pitch-black passages for hundreds of feet.

Although many hominins used caves as shelter, they kept near the entrance, within natural light’s reach. “To find a fossil hominin in such great abundance in the very, very far end of these cave systems is really, really odd,” says anthropologist Myra Laird, describing Dinaledi’s environment.

Separate teams excavating Sima and Dinaledi reached the same conclusion for each site: Living hominins schlepped corpses down there. While some researchers have suggested the chambers may have been more easily accessible in the past, geologists analyzing the sites have ruled out this possibility. They also reject natural causes, such as rushing water, a landslide, carnivores carrying in the bodies or hominins entering the chambers alive but getting trapped.

Forensic analyses of the remains at the Sima site, published in 2015 and 2016, used CT scans to identify fatal skull fractures in eight individuals. One of the skulls was clearly struck twice with the same blunt object, suggesting the lethal blows happened during face-to-face conflict.

A reconstruction of the Sima skull showing the angle of the lethal blows suggests they were delivered during face-to-face conflict. (Credit: PLOS ONE 2015)

Both the Sima and Dinaledi teams have “published a lot of information that makes deliberate disposal a reasonable interpretation,” says University of North Carolina at Greensboro anthropologist Charles Egeland, who was not part of either excavation. But, when he and colleague Travis Pickering combed through the data, the bones didn’t add up. “It didn’t seem like they had complete bodies,” Egeland says.

The two researchers launched their own study. They determined which skeletal parts were most likely to be preserved in different scenarios, such as intentional burial or a carnivore kill, based on patterns observed at previously identified sites. Egeland and Pickering found that certain bones, including ankle and wrist bones, were consistently missing from scavenged carcasses and other natural accumulations.

The bones preserved at both Sima and Dinaledi most closely matched this kind of natural accumulation pattern. Egeland stresses the results, published in 2018, don’t rule out deliberate disposal, “but it does make me think twice before automatically moving to a human explanation.”

Sima archaeologists think this kind of approach — using bones alone to explain the scene — is premature. Although excavations have been underway there since the 1980s, researchers continue to discover hominin bones.

Clues needed to solve these coldest of cases may eventually emerge from Sima and Dinaledi — but we’re unlikely to discover evidence of mourning as we know it.

In her paper published in the journal Biological Theory, Stiner compared the later Eurasian Neanderthal and H. sapiens burials, below domestic spaces, with the dark and inhospitable Sima and Dinaledi sites.

Stiner notes that at Sima in particular, the evidence, including the skull fractures, suggests victims possibly dumped by their killers, or some other untimely end.

“There are bodies in there,” says Stiner, “but there’s no love.”