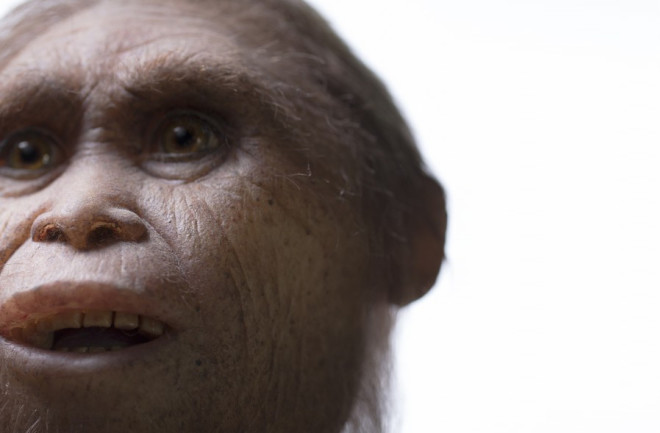 First found in 2003 — a likely second site was just announced — Indonesian hominin Homo floresiensis stood a mere meter tall. Reconstruction by Atelier Elisabeth Daynes. (Credit: Kinez Riza) A partial jaw, a bit of skull and half a dozen teeth: this handful of fossil finds from Indonesia might not seem like much, but at 700,000 years old they have delivered a definitive smackdown to Hobbit haters (and I'm not talking about Gollum). The small assemblage of fossils, belonging to at least three individuals, proves once and for all that Homo floresiensis, popularly known as "the Hobbit," was a distinct species. What's more, these fossils, described today in Nature, refine the evolutionary timeline of H. floresiensis and shed some light on the pint-sized hominins most likely ancestors. You may recall that a dozen years ago, researchers announced the discovery of a diminutive hominin that lived on the Indonesian island of Flores up until about 50,000 years ago. (When the fossils were first discovered, researchers believed they might have been a mere 17,000 years old. But results using more precise dating methods, published this March in Nature, established a range from 5o,000 to 190,000 years ago for the fossils of multiple individuals and associated tools.) Usually I have to work a bit to fit in a Tolkien reference but this one comes ready-made: The meter-tall hominin was instantly nicknamed the Hobbit and made an outsized splash in pop culture thanks to the popularity of The Lord of the Rings movies at the time (for some of us those movies, and the books which begot them, are still popular. Yesssss, precioussssss). With its small stature and a brain half the size of that of Homo erectus (the only other archaic hominin known from the general area, and the most likely candidate for its ancestor), H. floresiensis inspired a lot of theories, some more reasonable than others. One camp of researchers, for example, believed Shorty might have been an isolated example of pathological dwarfism or other abnormality. Without fossils from sites other than the initial finds at Liang Bua, the debate about whether H. floresiensis was a distinct species raged on.

In 2014, however, a team working at Mata Menge, 74 kilometers southeast of the Liang Bua site, unearthed the tiny treasure trove described today (along with stone tools and fossils of Pleistocene animals such as giant rats and Komodo dragons). While they have not formally classified the hominin bits as those of an early H. floresiensis, their size and shape strongly suggest that's the case. Results from a second team, also published today by Nature, detail dating methods used to arrive at an age of 700,000 years for the fossils. That date is key, because it establishes that H. floresiensis was on Flores and living small for hundreds of millennia, rather than being a one-off population downsized by disease or deformity.

Landscape around the second H. floresiensis site of Mata Menge on the island of Flores, Indonesia. Credit: Dr. Gerrit van den Bergh/University of Wollongong, Australia When you get up close and personal with the fossils, which include a couple tiny "milk teeth" from infants, things get even more interesting. The partial jawbone, for example, is about 20 percent smaller than Liang Bua jawbones. The earlier Mata Menge hominins may have been significantly smaller than the later Liang Bua individuals, or it could be an isolated extra-petite specimen; it's impossible to say without additional fossils to compare. While the six teeth found near the jawbone have a mix of primitive and more evolved features, they appear to be more similar to H. erectus than other earlier hominins.

Partial hominin jawbone from the Mata Menge site on Flores has features closer to H. erectus than the earlier H. habilis. (Credit: Kinez Riza) For a number of years, the two leading serious theories about H. floresiensis have been that either: 1) An earlier hominin, such as Homo habilis or perhaps even an australopith of some kind, made it out of Africa, alllllllllll the way across Asia and set up shop on Flores, evolving over time into Hobbity form; 2) H. erectus, present in Southeast Asia at least a million years ago, arrived at Flores and underwent a rapid downsizing, a phenomenon known as island dwarfism, due to limited resources. Both models are plausible but imperfect, as noted in a commentary that accompanies the two papers in Nature.

Let's take the notion that H. habilis or an australopith left Africa and headed for Southeast Asia. Researchers believe that the distance involved would have required an African exodus about 2 million years ago, and we don't have any strong evidence that occurred. Plus, some researchers quibble that an intercontinental road trip of that scale requires a big brain, something neither H. habilis nor H. floresiensis had. On the other hand, consider the hominin fossil-rich site of Dmanisi in the Republic of Georgia: The small-brained fossils there, dated to about 1.8 million years old, have been variously described as H. habilis or a subspecies of H. erectus. We certainly never expected to find hominins that old at Dmanisi — until we found them. In the second model, H. erectus, known initially from the famous 19th century Java Man finds, got to Flores and then got small. There are numerous examples of island dwarfism among animals living and extinct, but was 300,000 years — the period between Java Man and the Mata Menge Hobbits — enough time to shrink a population by about half? Maybe. Authors of the primary paper published today note that red deer from the island of Jersey took a mere 6,000 years to reduce to one-sixth the size of their ancestors. That's, er, small potatoes compared with 300,000 years. In fact, the downsized H. erectus theory seems to be winning, at least in the minds of the researchers involved in the Mata Menge discovery. The truth of the matter is that, now that we've finally found more Hobbit fossils, we need to find... more Hobbit fossils! Additional finds will help us build a more complete picture of both how the species got to Flores and why it's so much smaller than other hominins walking around at the time. Want more on today's big little fossil find? Check out Nature's classy video: