Researchers Get a Peek at How Other Animals See the World 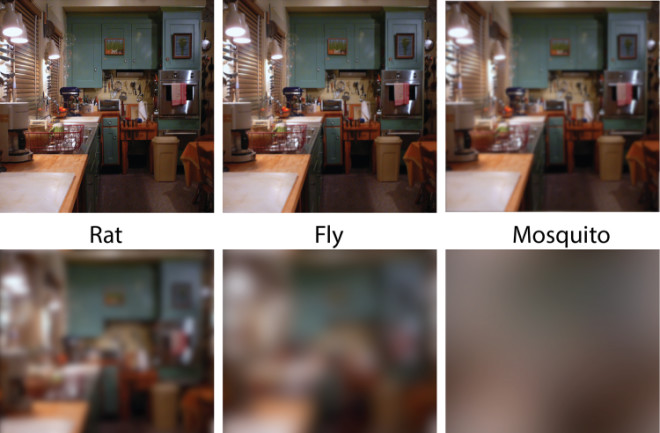 Animals have us beat in basically every test of sensory perception. Bats bounce ultrasonic waves to locate prey, and bears can smell a carcass from miles away.

But our abilities are respectable in one category: visual acuity. A study published recently in the journal Trends in Ecology & Evolution shows that humans see the world in finer detail than almost any other living creature.

Do You See What I See?

Scientists measure visual acuity in “cycles per degree,” the number of black-and-white parallel lines an animal can see in one degree of its vision. This is what determines how sharp objects appear, and it depends on how far the viewer is from what they’re viewing.

Compiling visual acuity estimates for about 600 species, the researchers found that the range of detail visible across the animal kingdom stretches across four orders of magnitude, with humans just below the top.

We see roughly 60 cycles per degree, and other primates are close behind. At more than double that, some birds of prey, like eagles, vultures and falcons, roost at the pinnacle of sight. They can pinpoint tiny rodents while soaring thousands of feet overhead.

But before you get eye envy, remember you could have it worse. No fish can distinguish more than about 40 cycles per degree. A human who cannot see more than 10 is deemed legally blind, but few insects see more than one. In crustaceans, the most ocularly gifted see a fraction of that.

Of course, visual acuity doesn’t tell the whole story of animal vision. For example, Eleanor Caves, a postdoctoral researcher at Duke University and lead author on the paper, said strong motion detection can help make up for blurry vision. A fly’s eyes may not be sharp, but anyone who’s tried to swat one knows they get along surprisingly well.

The image on the left shows the wings of a map butterfly as they might look to a jay looking for a snack, and on the right, to another member of its kind, such as a rival or potential mate. (Image courtesy of Eleanor Caves)

It’s difficult, if not impossible, to truly see through the eyes of another organism.  So while it’s natural to anthropomorphize and imagine they look at things the same as we do Caves cautionss that many animals likely live in a fundamentally different visual world.

“I don’t even know what your perception is like,” she says, “and you’re a member of my species.”

Visual acuity aside, post-processing in the brain could sharpen images in certain ways, for example by making edges more distinct. But the brain cannot invent detail when the eye does not deliver it, Caves noted. If you can’t distinguish the letters at the doctor’s office, the only solution is glasses.

With that in mind, scientists can make educated guesses about how the world might look to a variety of other animals in terms of detail, based on their visual acuity.

Caves and her colleagues developed a software program called AcuityView, and used it to reduce the spatial detail in photos to only what a given animal can perceive. The images offer a window into a hazy realm, and they suggest whole new meanings for the signals animals use to communicate with members of their own species and others.

It seems some animals may not even be able to see the elaborate patterns they themselves have evolved to display and create. Rather, Caves proposes, these signals might be cleverly designed to catch the attention of specific animals while evading the detection of others.

For example, some orb weaver spiders adorn their webs with silk decorations. One theory for these ornaments is that they deter birds, whose acuity is high enough to notice them, from flying through the web and destroying it. Another suggests they could be used to lure prey. But many insects can resolve so little detail that they may not know what hit them until they’re partially digested.

A spider web as seen in bird vision (left), and fly vision (right). The zigzags on the spider’s web send a secret message to birds that their insect prey can’t see, even from less than a foot away. (Image courtesy of Eleanor Caves)

A spider web as seen in bird vision (left), and fly vision (right). The zigzags on the spider’s web send a secret message to birds that their insect prey can’t see, even from less than a foot away. (Image courtesy of Eleanor Caves)

Similarly, a butterfly’s elegant markings could ward off predatory birds. But to another blurry-eyed butterfly, those same patterns may be just a smear of color (though perhaps that blur is what they look for in a potential mate).

Despite the significance of animal perception to scientific understanding, Caves said this aspect of vision is often overlooked. But this study could disqualify some hypotheses about animal communication, and thereby help pin down more plausible ones.

It wouldn’t be the first time new information led to further analysis of animal vision. In recent decades, she said, as researchers realized that many species perceive color far differently from us, they revisited classic experiments to account for that discovery.

“I think,” she said, “it’s time for something similar with acuity.”