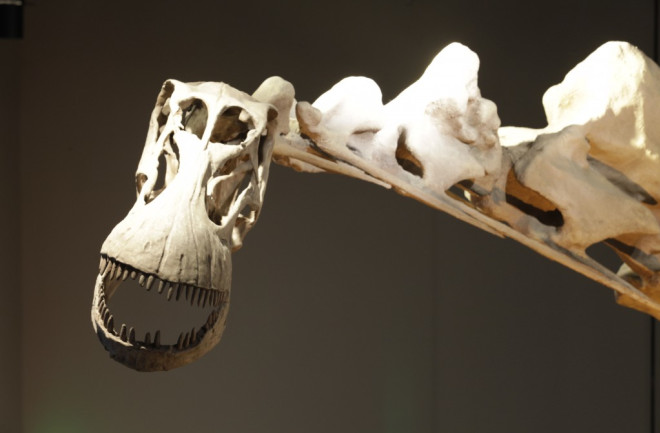 Up close and personal with Alamosaurus. Credit: Perot Museum of Nature and Science. One of the best things about my job is that I get to talk to a lot of paleontologists (admittedly my favorite -ologists). A couple years ago, I was fortunate to chat with Anthony Fiorillo and Ron Tykoski, both of the Perot Museum of Nature and Science in Dallas. We were all on the phone to talk Nanuqsaurus hoglundi, the Hobbit of tyrannosaurids, a ferocious little fella found well above the Arctic Circle. But, like most of the paleofolks I encounter, Fiorillo (the museum's chief curator) and Tykoski (director of its paleontology lab) were just having fun discussing dinosaurs. We kicked around the idea of why so many of us are smitten with the extinct animals early in life, and why that enthusiasm doesn't dull for those who make a career of it. "Dinosaurs are the gateway drug to science," Fiorillo said at the time. That comment stayed with me, because I think it sums up the way every child feels walking into a museum hall, looking up at these fantastic creatures and learning no, this isn't some special effects villain cooked up for Jurassic World, this was a living, breathing animal as real as you are.

Science can be exhilarating. It can also be a slog. So I salute the dynamic dino duo of Tykoski and Fiorillo, and their colleagues, for their latest paper, nearly 20 years in the making. I suppose you could say it's a paper more than 66 million years in the making, but deep time is kind of a tough concept for us puny humans, so let's go with a couple decades.

Alamosaurus sanjuanensis, based on a reconstructed skeleton on exhibit at the Perot Museum of Nature and Science in Dallas, which drew from three different specimen collections: the Perot Museum (blue), Smithsonian Institution (green) and the Vertebrate Paleontology Laboratory of the University of Texas at Austin (orange). Credit: Ron S. Tykoski. Alamosaurus, the focus of the new research, was named not for the historic mission in San Antonio but rather for the spot in New Mexico where fossils of the titanosaur were first found. Titanosaurs are the biggest dinosaurs, representing in many ways the pinnacle of sauropods (those familiar small-headed, long-necked, big-bodied, whip-tailed herbivores). Back in 1997 in Big Bend National Park in Texas, Dana Biasatti, a student who was part of a team excavating juvenile titanosaurs, took a break and went for a stroll. She happened upon some buried treasure. Specifically, wonderfully preserved neck vertebrae — nine of them, still lined up as they had been in life — from an adult titanosaur, Alamosaurus. Finding fossils is one thing, but excavating and prepping them for study is quite another. It took 4 years, working with the National Park Service and other parties, to sort out the permits and devise a plan to get the bones safely out of the ground at the remote location and into a lab environment. Dedicated team members hauled plaster, burlap and other supplies on their backs to the site to make protective jackets for the fossils — some weighing more than half a ton. A helicopter then moved the fossils to a flatbed truck that transported them hundreds of miles for prep and study.

Fossils in flight: a helicopter transports the Big Bend Alamosaurus fossils, in a protective jacket, to a waiting truck. Credit: Perot Museum of Nature and Science. While Alamosaurus (Alamosaurus sanjuanensis if you're being formal) isn't a new dinosaur — bits of it have been found throughout the American Southwest for nearly a century — the articulated vertebrae from Big Bend do provide new science, and help us fill in the details of where this giant fits on the sauropod family tree. Here's the link again to the new paper, in the Journal of Systematic Palaeontology. It's open access and I encourage you to check it out. While some papers get a bit dense for the non-scientist, this is a great introduction to paleontological research as it's experienced by the scientists neck-deep in it. And who knows, it might even prod you to take a course, visit a museum or do some additional reading. I want to be your paleopusher. The Big Bend fossils also represent the largest dinosaur found in The Lone Star State and you know, everything's bigger in Texas to begin with so, dang.

Longer than two school buses, the reconstructed Alamosaurus on display at the Perot Museum will hopefully serve as a gateway drug to thousands of future scientists. Credit: Perot Museum of Nature and Science.