The only tyrannosaur ever found outside temperate latitudes is barely two-thirds the size of a T. rex. 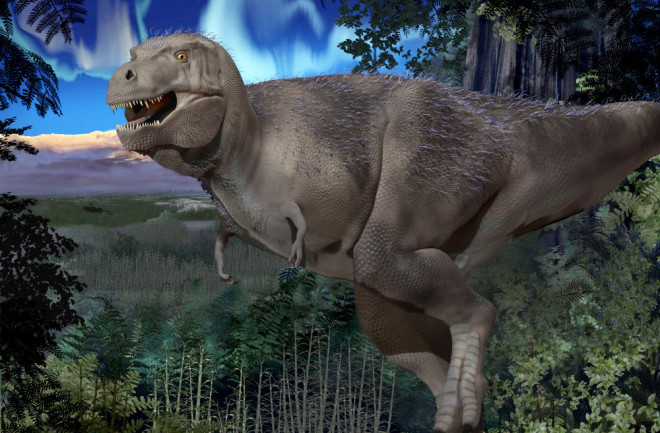 N. hoglundi was about 25 feet from teeth to tail. | Karen Carr

Nanuqsaurus hoglundi was the big little dinosaur find that nearly got left behind.

Classified in a March study, the hobbit T. rex, barely two-thirds the size of its more famous relative, roamed the Arctic some 70 million years ago. It’s the only tyrannosaur ever found outside temperate latitudes, rewriting our understanding of the animals’ diversity.

“I recall just hoping I’d remember to put those rocks on the helicopter,” says Anthony Fiorillo, curator of Earth sciences at the Perot Museum of Nature and Science in Dallas.

In 2006, Fiorillo’s team was above the Arctic Circle, on Alaska’s North Slope. The polar season for fieldwork is brief, and they were busy excavating horned dinosaurs. But they also noticed a few interesting-looking, basketball-size rocks lying around the site. Fiorillo set them aside, thinking he would take them if the helicopter had room. It did.

Paleontologist Ron Tykoski looked at the rocks when they arrived at the Perot a few months later with 11,000 pounds of other material from the Alaskan dig. “I realized, hey, that’s a skull with sharp, pointy teeth. That’s a predator,” says Tykoski.

But he was focused on the 4-ton horned dinosaur Pachyrhinosaurus perotorum. After a cursory examination, he decided the predator was probably closely related to Albertosaurus, a bipedal carnivore, and he set the rocks aside.

Yet as the researchers continued working, they noticed something. “We were finding isolated teeth with the horned dinosaur bones, even scoring on the bones, and started wondering, ‘Who’s eating our horned dinosaur?’ ” says Fiorillo.

The team took another look at those basketball-size rocks. The teeth found in the rocks were consistent with those that had once sunk into P. perotorum. Inspecting the fragments of skull, jaw and teeth more closely, they realized they had a tyrant on their hands.

Although short stuff compared with T. rex, N. hoglundi was still formidable, about 25 feet from teeth to tail. Its shrunken size may have been an adaptation to survive the long polar winter, when months of near or total darkness meant limited hunting opportunities.