The last male northern white rhino has died, but advances in IVF tech may revive the species. 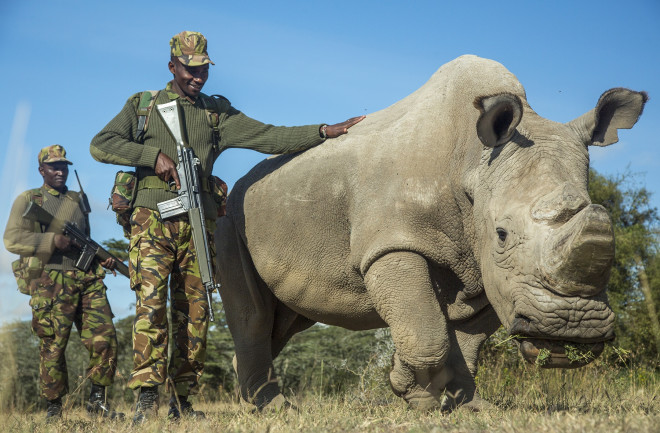 A rhino species on the brink of extinction might have new life, thanks to a novel approach to a time-tested reproductive procedure.

Sudan, the last male northern white rhino, died of old age at a Kenyan sanctuary in March. That left only two animals, both females, of his kind. When they die, the subspecies — which once numbered in the thousands, roaming east and central Africa — will be extinct.

But in July, a group of European researchers, led by Thomas Hildebrandt of the Leibniz Institute for Zoo and Wildlife Research, reported in Nature Communications that they had created hybrid embryos. The team used frozen sperm from a northern white rhino that died years ago, and eggs from the closely related southern white rhino. It’s the first time researchers have successfully used in vitro fertilization (IVF) to create rhino embryos.

Reproductive specialists spent years devising a way to perform IVF on a rhino, taking into consideration its anatomy, 2-ton size and physiology. For example, the team had to build a custom probe to harvest eggs from the rhino’s ovaries, which are inaccessible using standard equipment, says Cesare Galli, a reproduction biologist involved in the project.

By August, the team had created seven embryos in the lab. The next step is to implant an embryo in a southern white, which will carry the fetus and, hopefully, give birth to a hybrid calf. Galli says it might happen within three years.

Though a hybrid calf would preserve some of the genes of the northern white, it won’t save the species. That’s why researchers plan to collect eggs from the remaining two northern whites, Najin and Fatu, housed at Kenya’s Ol Pejeta Conservancy, where Sudan died. Both females — daughter and granddaughter of Sudan, respectively — are infertile.

Once the eggs are harvested, researchers will fertilize them with northern white sperm to create purebred embryos. A surrogate could give birth to a northern white in four or five years, says Galli.

Galli hopes to use IVF on Sumatran rhinos in Indonesia, which number fewer than 100. “We need to work out the details,” he says, “but it can be done.”