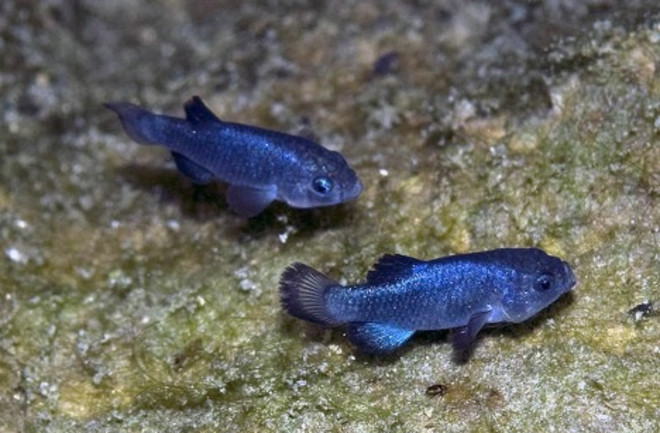 A rocky outcropping in the middle of the hottest place on Earth and the driest stretch of land in North America is hardly the place you’d expect to find fish. But a group of tiny, shimmery fish frolic seemingly without a care in the famous Devils Hole in the Death Valley desert.

The narrow cavern is filled with shockingly clear water that’s regularly 93 degrees Fahrenheit with dangerously low oxygen levels. Indeed, the bottomless geothermal pool that gives the Devils Hole pupfish (Cyprinodon diabolis) their name — plus some frisky mating behavior that resembles puppies playing — is the narrowest geographic range of any vertebrate. And with only 175 total fish at last count, they’re the rarest fish on the planet.

But Earth has warmed 1.9 degrees Fahrenheit since 1900, and desert ecosystems that cover about 25 percent of the Earth’s surface are especially at risk, along with the desert fish.

Climate change will shift seasonal patterns and rising temperatures will increase physiological stress on desert plants and animals. Now, scientists are racing to study how these unique fish have survived in nearly uninhabitable environments to save them.

A Species ‘At the Edge’

The Devils Hole pupfish is considered the “canary in the coal mine” for broader environmental changes. Scientists have counted the population since the 1950s, typically finding about 200 during springtime and 450 in fall until the 1990s, when numbers began to drop.

“It hit rock bottom in 2007, when we were at 38 individuals, and 2013, when we were at 35,” says Chris Martin, a fish ecologist and professor at University of California Berkeley. “But they're on the rebound. Most recently, it was up to 175, the highest it's been in 22 years.”

Most other fish would not survive a habitat like Devils Hole — its extreme water means less dissolved oxygen, which fish need to live. Pupfish have an adaptive behavior called paradoxical anaerobism, where they depress their metabolism and don’t breathe oxygen for up to 2.5 hours, likely because of their gut microbiome, according to one study. This behavior could help amid climate change-fueled heat and subsequent oxygen deprivation.

“Devils Hole is already at the edge of what fish can handle on a consistent basis,” says Dr. Jennifer Gumm, a fish biologist and facility manager at Ash Meadows Fish Conservation Facility. Gumm manages a satellite facility where a replica Devils Hole sustains a refuge population of the pupfish for further research.

Despite Devils Hole’s 500-plus-foot depth, the fish mostly stay in the top 25-35 feet. They feed and breed on a barely submerged 180-square-foot rock shelf. And water level fluctuations put the entire population at risk. However, the fish tend to avoid the shelf when the sun beats down too hard, says Gumm. They are less active on the shelf during the summer, and as climate change drives temperatures up during the spring and fall (the main mating seasons), they could spend less time spawning or eating the shelf’s plentiful algae (a main food source).

Indeed, one study found the shelf water temperature had risen above optimal conditions for sustaining egg hatching and food availability for juveniles from 2009-2012, possibly contributing to the population’s decline at that time. Global warming could exacerbate this trend.

Still, overall, the small population has extremely low genetic diversity. Researchers in Martin’s Berkeley fish lab recently sequenced the genome of Devils Hole pupfish and found some unique mutations, including one affecting the tail of the sperm. This might make it unable to swim and thus fertilize eggs.

“All of this inbreeding is pretty bad,” says David Tian, a researcher in the lab and author of the paper. But there’s a potentially serendipitous flip side: genetic purging. “Purging is this mechanism where once these mutations become homozygous, they can be [naturally] selected, and evolution can actually get rid of them from the population,” he adds.

The Fate of Desert Fish

For climate change, a common phrase for wildlife could go: Adapt, migrate, or die. For fish in isolated desert water sources, it’s difficult to migrate.

Desert fish will have to compete for scarcer resources and adapt to even bleaker conditions. It’s not just heat — climate change also fuels droughts and wildfires. When the flow in springs drops, so does nutrient availability for endemic fish. Streams that dry up can lead to fragmentation (when parts of a stream no longer connect), stranding fish. And when ash and soot fall into, or become runoff in streams and lakes, fish can choke.

But desert fish can be resilient. A recent study found that natural selection for other desert fish was stronger in regions that were drier, compared to those that were semi-dry. Fish that originated in drier, harsher conditions fared better during flood events. And they retreated with the floodwaters to wait out the following extended drought periods in small waterholes.

Many of these better adapted fish also had a different version of a particular protein used for taste and smell, to detect salinity and water flow, and to control light sensitivity for vision. If it can help their ability to sense the environment and how it changes, it could be an advantageous adaption, the study’s authors suggest. Which goes against the logic that small populations are evolutionary dead ends.