Catch and Release Fishing Might Hurt Fish More Than Thought

I mean, how would you get along with a hole ripped in your cheek? 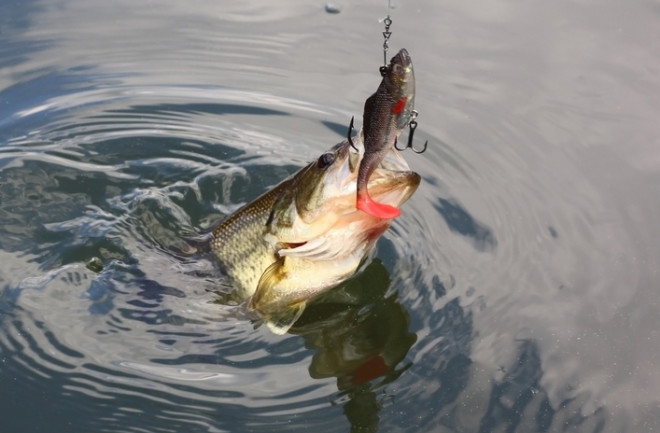 If you’re a fish, it sucks to have a hole ripped in your mouth by a hook.

New research out today in the Journal of Experimental Biology found that fish can’t suck up food as well after having a hole poked in their mouth by a fishing hook.

The team, led by Tim Higham at UC-Riverside, focused on marine shiner perch for their study. These perch are a common target for anglers and belong to a broader group of fish (along with bass, bluegill, and other perch) known as suction feeders.

These fish eat by getting close to – but not quite touching – their next bite of food. Once in place, they open their mouth extremely fast and the pressure difference pulls in a mouthful of water and food.

This is the same way humans suck. Imagine yourself drinking through a straw: all you’re doing is opening your mouth while keeping your lips sealed tight around the straw.

Now imagine there’s a hole poked in the side of the straw. Or, to be slightly more gruesome, in the side of your mouth. The suction wouldn’t work as well. This, the researchers found, is analogous to what happens to a fish after an encounter with a hook.

Sucks to Not Suck

The researchers caught the perch for their experiment off Vancouver Island in Canada. Half they caught with a traditional hook-and-line. The other half they caught in a seine net to serve as a hole-less control group.

They brought the perch back to land to undergo tests in tanks in their lab at the Bamfield Marine Science Center.

While watching with high-speed video cameras, they fed the fish. The videos allowed them to measure how wide the fish opened their mouths and how quickly, how close they got to their bites of food, and how fast the food was sucked into their mouths.

They found that the angled fish behaved the same as the net-caught fish. They opened their mouths the same amount, just as quickly, and approached their food at the same distance.

But thanks to the hole ripped in their mouths, the recently-angled fish sucked up food 34 percent slower than the net-caught fish.

“We were surprised with how dramatic the difference was,” says Higham. “For there to be that large of a difference was definitely striking. No pun intended, of course.”

Much to Learn about Fish

The researchers also used computer modeling to predict how quickly the food should get sucked up, based on parameters like the volume of the fish’s mouth and the size of the hole ripped open by a hook.

Their models predicted the hook-hole would slow their eating, but less than half as much as they actually observed. In other words, the fish were even worse at eating than expected. This suggests something else is at play that is not yet understood.

Important next steps will be to also find out how quickly the hook-induced holes heal in the fish, and whether the slowed eating makes a meaningful difference in their health.

Though the unknowns make it too early to suggest any changes to fishing practices, Higham emphasizes that current catch-and-release practices are still certainly better for fish populations than not releasing the fish at all.

If future research were to reveal that this slowed feeding really impacts the fish, one possible solution could be to simply reduce hook sizes whenever possible. This meshes with the findings from the group’s computer models: larger holes mean worse performance during feeding.

Another application could be to reconsider catch-and-release fishing of rare fish, depending on how well the released fish are surviving.

But it’s all too soon to say. What we do know, now, is that a hook injury affects how fast a suction-feeder can suck in prey.

“All we were doing was what people normally do in capturing (fish) using hook-and-line fishing,” says Higham. “It’s a fairly simple question. There’s nothing complicated about it, it’s just no one has ever thought of this or looked at it in this way.”