New discovery lends important insight into the evolution of these giant flying reptiles. 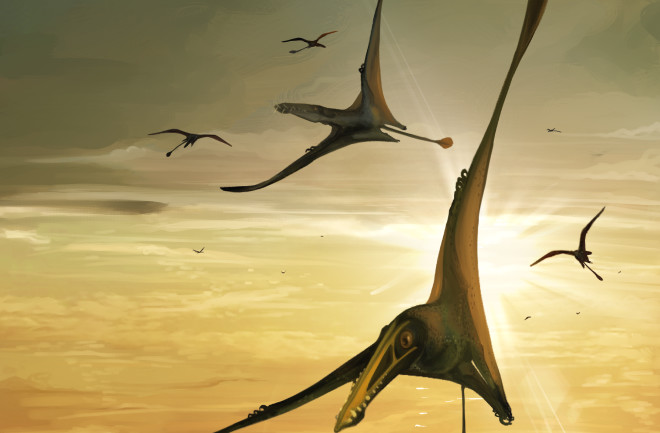 Pterosaurs first appeared 215 million years ago. They took to the air 50 million years before birds. And while they lived alongside some of the bigwigs of the Cretaceous period like Tyrannosaurus rex, Velociraptor and Spinosaurus, these weren’t dinosaurs — they were flying reptiles that successfully ruled the skies until they went extinct 66 million years ago.

By all standards, pterosaurs were evolutionarily triumphant, with numerous species thriving all over the globe. But there’s a lot we don’t know about them because few pterosaur fossils survive intact. That’s why paleontologists were ecstatic to find a perfectly preserved pterosaur beneath the sandstone on Isle of Skye, an island off of Scotland’s northwest coast.

“Pterosaurs are some of the rarest vertebrate animals in the fossil record. Their bones are so lightweight and fragile, some with walls thinner than a sheet of paper,” says Steve Brusatte, a paleontologist and professor at The University of Edinburgh. “They had to be light to fly, but their wispy bones are so easily destroyed that they rarely turned to fossils.”

The fossil was first discovered in 2017 on a National Geographic-funded expedition by one of Brussatte’s PhD students, Amelia Penny. Penny saw the pterosaur’s jaw peeking out from the limestone on a tidal platform, right after the tide had gone down. The next morning, the team worked tirelessly to chisel and hammer the specimen from the limestone. “As we split the rock, we saw there was an entire skeleton inside. It was the most incredible moment I've ever had as a paleontologist – the greatest find any of my teams have ever made,” says Brussatte.

With the rock split and exposed to the ocean, Brussatte and his team raced to finish cutting the specimen out of the limestone to avoid it being ruined by the tide. A day later, the team carried out a 400 pound slab of limestone with the exquisite fossil embedded inside. “This pterosaur was big – much, much bigger than we expected a Jurassic-aged pterosaur to be. It was about the size of a modern-day albatross, the largest flying birds,” he says.

According to Brussatte, when it was soaring over the lagoons of Scotland in the middle Jurassic, the pterosaur would have been the world’s largest flying species and, as far as scientists know, the largest airborne creature that had ever lived before that. Named Dearc sgiathanach, which translates to “winged reptile” in Gaelic, the specimen is the first of its kind to tell us that pterosaurs were already getting bigger 170 million years ago. And according to the findings described in a recent Current Biology study, this winged giant was a juvenile and still had room to grow.

Lead study author Natalia Jagielska could hardly contain her excitement when she described the find in a recent Zoom interview. “It’s so perfectly preserved,” she said. “I was so excited, I named it Scottie.”

The sheer size of the specimen surprised Jagielska. She says that pterosaurs would get much bigger by the end Cretaceous period — in some cases, as big as buses. But their larger size during the Jurassic was unexpected. It shows a transitional period of evolution and fills in an important and frustrating gap in our understanding of pterosaurs. Fossils during the Middle Jurassic are usually poorly preserved due to a rise in environmental humidity. “We’re not sure why this one survived so well, but it did,” she says.

Researchers can tell from the skull structure and larger developed fangs that by the Jurassic period, some pterosaurs had moved on from eating insects to slightly larger vertebrates and fish. They also had necks that were longer than during the Triassic period — known by scientists as “the age of lizards,” — but not the giraffe-length that they would evolve into by the Cretaceous.

The “in between” period tells us how they got from tiny fliers to the fighter-jet-sized beasts that ruled the skies until their sudden extinction, along with dinosaurs, 66 million years ago. The mass extinction event, most likely caused by a giant asteroid hitting the Earth, changed the environment so drastically that three-quarters of the Earth’s plant and animal species saw their end. And unless you count airplanes and space shuttles, nothing anywhere close to pterosaurs’ size has taken to the skies ever since.