"Pornographic" Statue Could Be World's Oldest Piece of Figurative Art 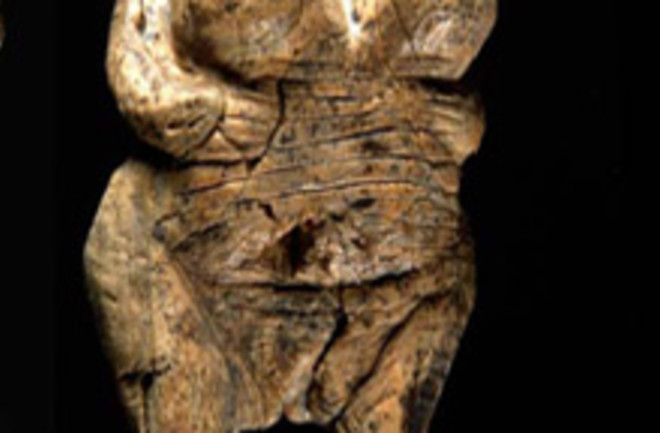 Named the Venus of Hohle Fels after the cave in southwestern Germany where it was recently excavated, the object dates to at least 35,000 to 40,000 years ago, based on more than 30 radiocarbon measurements conducted at the site [Discovery News].

The statue is also "bordering on the pornographic" by our modern standards, one expert says, with its huge, bulbous breasts and oversized genitalia. Germany's southern caves

were presumably inviting sanctuaries, scholars say, for populations of modern humans migrating then into central and western Europe. These were the people who eventually displaced the resident Neanderthals, around 30,000 years ago. Dr. Conard reported that the discovery was made beneath three feet of red-brown sediment in the floor of the Hohle Fels cave. Six fragments of the carved ivory, including all but the left arm and shoulder, were recovered. When he brushed dirt off the torso, he said, “the importance of the discovery became apparent” [The New York Times].

The Venus, which is described in a paper in Nature, was carved from a woolly mammoth tusk, and measures just over two inches long. In place of a head the statue has a polished ring, suggesting that the carving may have been hung from a string and worn like a pendant. The newfound object reminds

experts of the most famous of the sexually explicit figurines from the Stone Age, the Venus of Willendorf, discovered in Austria a century ago. It was somewhat larger and dated at about 24,000 years ago, but it was in a style that appeared to be prevalent for several thousand years. Scholars speculate that these Venus figurines, as they are known, were associated with fertility beliefs or shamanistic rituals [The New York Times].

Or there may be a simpler explanation for why the Venus of Hohle Fels was carved, argues anthropologist Paul Mellars, who wrote a commentary on the find in Nature.

"If there's one conclusion you want to draw from this, it's that an obsession with sex goes back at least 35,000 years.... But if humans hadn’t been largely obsessed with sex they wouldn’t have survived for the first 2 million years. None of this is at all surprising" [LiveScience]

, he says. Human-made art goes back further in our history; the first abstract, geometric designs date from around 75,000 years ago. But the jump to figurative art is a significant cognitive step, researchers say, and could be tied to the development of language, another symbolic system. Jill Cook, an expert on ancient figurines, says the Venus

"shows that people at this time in Europe had reached a stage in development of the brain which enabled objects to be symbolised and abstracted.... You're dealing with a mind like ours, but simply a different time and environment" [New Scientist].