Pocket Science: plague-running mice, and how to watch mutations in real time

Not Exactly Pocket Science is a set of shorter write-ups on new stories with links to more detailed takes, where available. It is meant to complement the usual fare of detailed pieces that are typical for this blog.

– has a notorious track record for massacring humans, creating at least three major pandemics including the Black Death

of the 14th century. But it’s mainly a disease of rodents and it regularly infects the black-tailed prairie dogs

of North America. It’s an enigmatic killer. It will remain relatively silent for years before suddenly exploding into an epidemic that kills nearly all the prairie dogs in infected colonies within a few weeks. Now Daniel Sakeld

. Prairie dog colonies, and their diseases, are generally isolated from one another. Even though Yersinia is very persistent, it eventually fades away unless it finds a new group of hosts. The grasshopper mouse provides it with just such an opportunity by acting as an alternative and highly mobile host for Yersinia. It’s a plague-runner. By scampering across the grasslands, it inadvertently creates a network between otherwise unconnected colonies, opening up corridors for Yersinia to spread. By creating a mathematical model, and observing both rodents in the wild, Sakeld found that when the mouse is absent, only a small proportion of prairie dogs are plagued by plague. In these conditions, infections spread very slowly during fights and hostile takeovers between neighbours. When mouse numbers pass a threshold, fatal plague epidemics are virtually guaranteed. The numbers of grasshopper mice in the grasslands rises and falls over time, a cycle that could spell life or death for the prairie dog. These patterns of lengthy lurking and sudden death are also shared by many other deadly diseases like anthrax and hantaviruses. In these cases, alternate hosts like the grasshopper mouse might also be involved in the sudden rise of deadly epidemics. Reference: PNAShttp://dx.doi.org/10.1073/pnas.1002826107 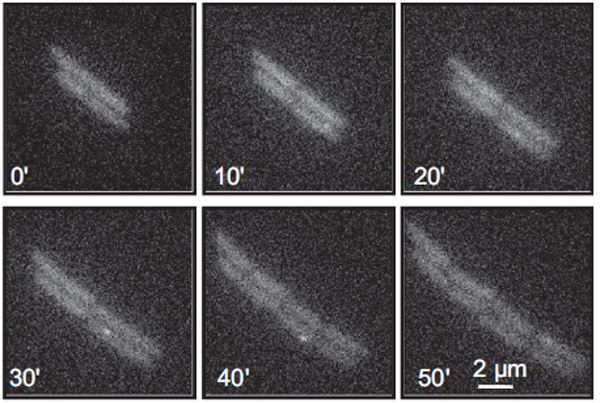 Events occur in real time – watching the birth of mutations Life is a massive game of Chinese whispers – information is constantly being passed on and as this happens, errors build up. Every time a cell divides in two, its genetic information is copied and there’s a small chance that mistakes (or ‘mutations

’) will creep in. Some of these mutations will be beneficial, others will be fatal. Either way, they provide fuel for evolution, producing the variation that natural selection acts upon. Now, Marina Elez from University Paris Descartes Medical School has found a way to spot mutations in real time. She can look at dividing cells and literally watch the moment when mutations show up across the entire genome. The technique works in bacteria, and it could be expanded to study the birth of mutations in more complex cells or even cancers. Studying mutations isn’t easy. They’re very rare and most don’t produce any noticeable effects that would give away their presence. More often not, they’re repaired by proofreading proteins

, which watch for errors in copied DNA and edit them back into shape. Elez realised that these proofreaders could lead her to the location of mutations – all she needed to do was follow. She focused on one bacterial proofreader called MutL, which forms large clusters around mutations that it can’t repair. Elez tagged MutL with a molecule that glows in the dark. The result: bacteria that give off tiny pinpricks of light at every point of their genome with an irreparable mutation. By counting these bright dots, Elez could estimate the mutation rate in her bacteria. And fortunately, her estimate was a good match for the predictions of earlier studies. Elez also thinks that the approach should work in other living things because proofreading proteins like MutL are very similar from species to species. The technical challenges might be greater in more complicated cells, but the principle of watching mutations in real time is sound. And that opens up all sorts of possibilities. You could, for example, look at tumours, to see when and where the genetic changes that create a cancer will emerge. Reference: Current Biology http://dx.doi.org/10.1016/j.cub.2010.06.071