The secret of drug-resistant bubonic plague

The plague, or the Black Death, is caused by a microbe called Yersinia pestis. In the 14th century, this microscopic enemy killed off a third of Europe's population. While many people consign the plague to centuries past, this attitude is a complacent one. Outbreaks have happened in Asia and Africa over the last decade and the plague is now recognised as a re-emerging disease. In 1996, two drug-resistant strains of plague were isolated from Madagascar. One of these, was completely resistant to all the drugs that are used to control outbreaks. 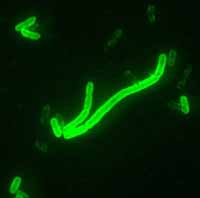 Anyone interested in bacteria can attest to their ability to evolve resistance to drugs. In the case of drug-resistant plague, the secret to its powers is a plasmid - a small free-floating ring of DNA, that carries drug resistance genes. Bacteria can trade plasmids across individuals, transferring genes between each other in ways that humans can only achieve with technology. The worry is that common and less harmful bacteria could transfer drug-resistance plasmids over to Yersinia, resulting in new resistant strains.

Timothy Welch and colleagues from the United States Department of Agriculture showed that this concern is well-founded. They found that the plague plasmid is virtually identical in parts to plasmids from an increasingly common strain of Salmonella that is also resistant to multiple drugs. They even found related plasmids were in other drug-resistant bacteria isolated from meat samples across the USA during quality control checks. 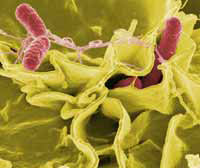 A word of caution - this doesn't mean that people risk contracting plague from eating meat. Even though the plasmids are strikingly similar, the bacteria involved are very different. But it does mean that the plague bacterium could potentially gain drug resistance from other common resistant bacteria, if they should both find themselves in the same human or flea host.

Despite this scary scenario, Welch's study also provides us with a silver lining. We are aware of the threat and we know how to monitor for it, by searching for the plasmid. Monitoring is especially important because the plague has all the qualities you would look for in a potential biological weapon - a high fatality rate, no vaccine and possible air-borne transmission. If the worst happens, we will want to be prepared.