The thick slime left behind by garden snails tells some plants to become less tasty. 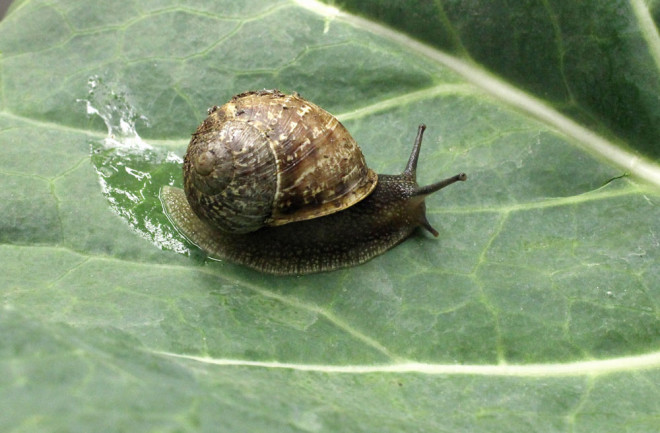 The thick slime garden snails leave behind tells some plants to become less tasty to the snails.  | Sarah Swanson/University of Wisconsin-Madison

It’s an animal-eat-plant world out there, with the consumers and consumed engaged in a continuous evolutionary race to come out ahead. Scientists at the University of Wisconsin-Madison have uncovered a new twist in one roadside weed’s strategy: It makes itself less palatable when it senses an herbivore lurking nearby, instead of waiting to be attacked.

Ecologist John Orrock, who studies how animals balance the need to protect themselves from predation with other needs, such as eating and mating, hatched the idea for this research when he was studying snails in a California grassland. He already knew that plants can change their chemical structure to protect themselves once attacked, or just touched, by a hungry herbivore. But what if the aggressor were just hanging around, looking at its options? The fact that snails excrete slimy evidence of their presence made them the perfect subjects for studying how plants might respond to an enemy who was lurking but hadn’t yet attacked.

Orrock and colleagues watered black mustard seedlings, a common annual plant found the world over, using water spiked with the slimy residue of common garden snails, a natural predator. The treatment, given five times over two weeks, mimicked snails crawling their way around plants, choosing the best greens to eat and depositing their slime as they go. The researchers put these plants, along with untreated seedlings, into boxes with hungry snails. The plants that had repeatedly received the slimed water were least likely to end up a snail snack.

What’s in the snail slime that triggers the plant’s response and exactly how the plant makes itself less palatable to snails are unclear, Orrock says. “People that work on animals realize the world is an information-rich place, and animals pay attention to that information,” he says. But as his research shows, animals aren’t the only ones tuning in. “The world of the plant is a lot more interesting than we might give it credit for.”

[This article originally appeared in print as "Snail Fail"]