Plants May Not Be Methane-Spewing Climate Criminals After All 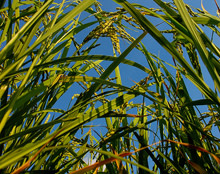 Three years ago, a controversial study alarmed climate researchers by stating that plants produce methane, a potent greenhouse gas, as part of their normal operations. Those findings went against the standard idea that forests are one of our few buffers against global warming since they absorb and store carbon dioxide; suddenly, scientists began wondering if planting more trees might do more harm than good. But now a new group of researchers says it has refuted the 2006 study, although the scientist who did the original work is not backing down from his claims. In the new study, to be published in the Proceedings of the Royal Society B, researcher Ellen Nisbet first looked at how that earlier study was conducted, and saw that the earlier researchers had put glass chambers over plants growing in the wild and measured how the mix of gases within the chamber changed. Nisbet says that procedure meant that the plants could have absorbed methane from the soil, instead of creating it themselves.

Part of her team's work involved growing several different varieties of plant, including maize and rice, in media that contained no organic material, so eliminating the chances of methane being formed through decay in soil. They found during these experiments, conducted in closed chambers, that the plants produced no methane at all [BBC News].

In a related experiment, the researchers

fed basil plants with water containing dissolved methane. Later, the air from that chamber was analysed and found to contain the gas. The team concludes that plants do emit methane during transpiration - the release of water from leaves - but only the methane they have absorbed in water from soil [BBC News].

The researchers did find that plants emit small amounts of methane when they're exposed to stressful conditions (like high temperatures or intense ultraviolet radiation), but they say that occurs because the plant is rotting slightly, and add that it's not a normal part of the growth cycle. The earlier study had suggested that plants must have an undiscovered biochemical process that generated the gas, but the new research argues that plants are incapable of making methane.

A search of plant genome databases found them to contain no genes comparable to those of certain bacteria known to make the gas.... "I think we're really getting to the end of the story," [said study coauthor Euan Nisbet]. "There's no fundamental biochemistry to be discovered, and no new metabolism. We certainly don't need to rewrite the plant textbooks" [Nature News].

But Frank Keppler, one of the coauthors of the original study, still thinks his team got it right in 2006, and says he'll keep looking for that mysterious biochemical pathway. Related Content: DISCOVER: Plants Grab Control of the Global Greenhouse covers the 2006 study DISCOVER: 10 Ways Methane Could Brake Global Warming--Or Break the Planet 80beats: Arctic Tundra Surprises Scientists With Autumnal Methane Burps 80beats: Methane Bubbles in the Arctic Ocean Give Climate Scientists the Willies