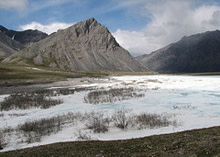 The Arctic plains of Greenland may not seem like a very dynamic place in the autumn, as the cold descends and the topsoil slowly freezes. But researchers who lingered there into the darker months last year discovered that there's more happening than meets the eye: Methane emissions from the ground spike every fall, just when they were expected to be dropping off to zero. Says lead author Torben Christensen:

"Mother Nature is showing us something that is really surprising.... Nobody would expect to have loads of gas seeping out from a frozen environment" [Reuters].

Methane is created when bacteria in the soil feed on rotting organic matter, a decomposition process that requires the warmth of spring and summer. But Christensen hypothesizes that the methane released in the fall is the end of a process that began months earlier.

“Most of the methane is produced during the warm summer months, but not all of it is emitted then,” says Christensen. At the Greenland site, for example, only the uppermost 30 to 50 centimeters of soil thaws each summer. In autumn, the ground freezes from above. The top layer of soil freezes and expands, pressurizing the soil beneath, Christensen contends. Because the underlying permafrost is impermeable, any methane that has accumulated in the thawed soil during the summer is squeezed out and forced to the surface [Science News].

The mechanisms of methane's release from the Arctic is of great interest to climate scientists, who worry about the vast amounts of the potent greenhouse gas that are trapped in the frozen soil, and wonder what will happen if global warming thaws more of the land and releases more gas. But the new findings, published in Nature [subscription required], do not

—instead they help researchers understand when and under what conditions that gas is emitted. Christensen's team has studied methane emissions at the Greenland site for several summers, but the scientists usually packed up and left in September, assuming that there was nothing more to see.

But last year, as part of the research push for the International Polar Year, a field station in northeastern Greenland stayed open two months later than usual. In those months, Christensen and his colleagues measured cumulative emissions as large as those recorded over the summer – with peak rates at some collection points higher than had ever been seen in tundra [Nature News].