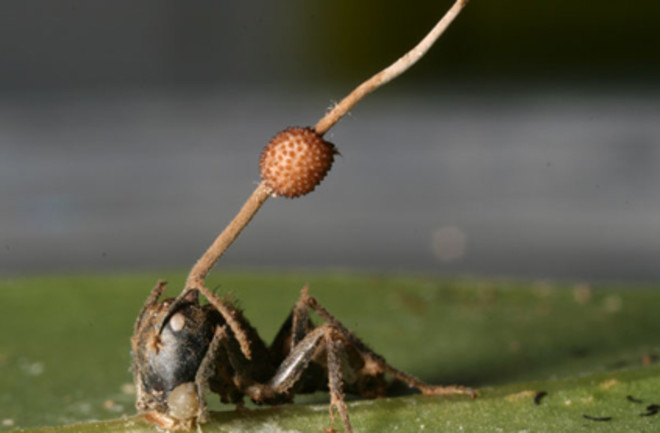 Here's one that I didn't touch on in DISCOVER's creepy gallery of zombie animals controlled by mind-altering parasites: A parasitic fungus called Ophiocordyceps unilateralis that infects a plain old carpenter ant and takes over its brain, leading the ant to bite into the vein that runs down the center of a leaf on the underside. The ant dies shortly thereafter, but the fungus gains the nutrients it needs to grow this crazy stalk out of the ant's body and release spores to create the next generation of ant-controlling fungi. This cryptic cycle has been going on for at least 48 million years. In a study forthcoming in Biology Letters, Harvard's David Hughes argues that a fossilized leaf found in a fossil-rich part of Germany's Rhine Rift Valley bears the scars of the ant's trademark death bite. The ant bites down hard so the fungus will have a stable position when it grows a stalk out of the ant's head. But even so, Hughes says, he doubted the mark would turn up in the fossil record—that is, until serendipity reared its random head:

"I thought it was a very, very long shot to find such a fossil, but indeed, as luck would have it, two paleobotanists, Conrad Labandeira at the Smithsonian Institution in Washington and Torsten Wappler at the Steinmann Institute in Bonn, were sitting around wondering how that particular damage type might be explained" [MSNBC].

Why, though, should we believe these 48 million year old ant bites came from zombie carpenter ants and not just run-of-the-mill, self-determining ants

Hughes doesn't think the bites could be anything else — such as the vein-cutting behaviour exhibited by some other ants or beetles during feeding — because the location on the leaf vein and shape of the marks are so unusual. "It is not normal ant behaviour to bite into the leaf vein because it has no real nutritional value to the ant and can in fact be toxic in some plant species," he says [Nature].

If Hughes' dating is correct, then the fungi

have had plenty of time to fine-tune their zombifying practice into the ruthlessly efficient mind control we see today. The Guardian reports

that the fungi don't care for the conditions at the canopy or the base of a forest, so they infect ants at a middle altitude. This works out well, because once they grow the stalk and fire the spores, those spores drift down to the forest floor where they can infect more ants and continue the parasitic cycle. Unfortunately for the victimized (and the easily grossed-out reader), these kind of parasitism is stunningly widespread. Check out the gallery

Related Content: DISCOVER: Zombie Animals And the Parasites That Control Them

80beats: Parasitic Wasps Got Their Poison from an Ancient Virus