Otter-Like Fossil Is a Missing Link in Seal Evolution 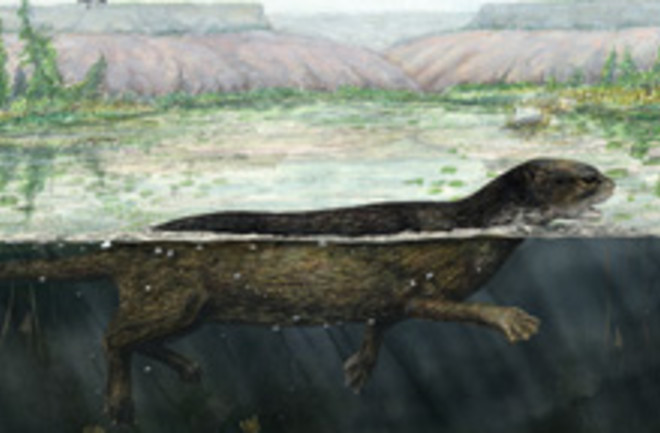 On a rocky island high in the Canadian arctic, paleontologists have unearthed the fossilized remains of a versatile, web-footed creature that could prowl over land and paddle in the water, and researchers say it represents a "missing link" in the evolution of seals, sea lions, and walruses. Those animals all belong to a group called

pinnipeds, or fin-footed mammals, which are descended from land-living ancestors and evolved flippers in place of limbs as they adapted to water. This evolutionary process has been difficult to study precisely because the earliest known pinniped ... already had flippers, and scientists did not have access to transitional forms in the fossil record [Times Online].

Now, the new discovery of the nearly complete fossil skeleton helps fill in the evolutionary gap. Researchers named the

creature Puijila darwini ("pew-YEE-lah dar-WIN-eye"). That combines an Inuit word for "young sea mammal," often a seal, with an homage to Charles Darwin. The famed naturalist had written that a land animal "by occasionally hunting for food in shallow water, then in streams or lakes, might at last be converted into an animal so thoroughly aquatic as to brave the open ocean" [AP].

"The remarkably preserved skeleton of Puijila had heavy limbs, indicative of well developed muscles, and flattened phalanges (finger or toe bones) which suggest that the feet were webbed - but not flippers.... This animal was likely adept at both swimming and walking on land. Puijila is the evolutionary evidence we have been lacking for so long" [BBC News].

The fossil was found in a meteorite impact crater that held a lake when Puijila lived, around 20 million years ago in the Miocene Period; researchers have also found fossilized fish in the sediment.

The inland location on Devon Island, Nunavut, suggests that pinniped evolution featured a freshwater phase.... During that period the animals frequented the then temperate Arctic's lakes and rivers. The species may have gradually adapted to an ocean lifestyle after lakes had begun to freeze over in winter, depriving the seals of food [National Geographic News].

Related Content: 80beats: Primitive Proto-Whales May Have Clambered Ashore to Give Birth 80beats: Whales Had Legs Until 40 Million Years Ago, Fossils Show DISCOVER: How to Pinpoint a Pinniped: what you can learn from a radio transmitter on a seal's head DISCOVER: Portrait in Blubber explores the mysteries of elephant seals' sex lives and diving habits Image: Mark A. Klingler of Carnegie Museum of Natural History (CMNH)