How to Pinpoint a Pinniped

It's easy—stick a big radio transmitter on their heads. 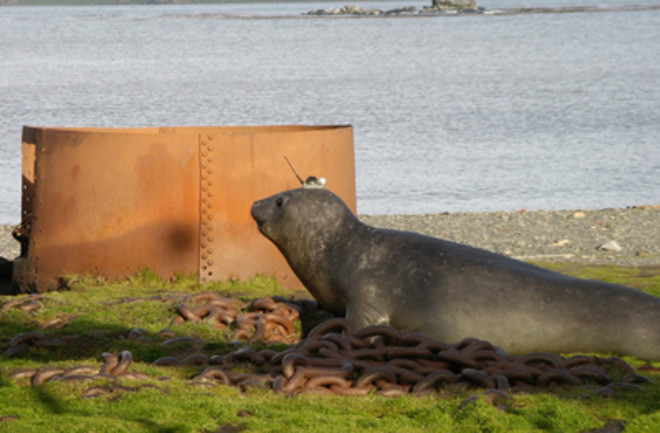 Mike Fedak’s team at the Sea Mammal Research Unit in Scotland has recruited seals as oceanographers. At first the group was equipping seals in the Southern Ocean with data recorders to study sea mammal behavior. But then, says Fedak, “we realized we didn’t know enough about the places where the seals went.”

The box glued to the seals’ heads may be a little obtrusive, but these “tags” don’t seem to bother the seals or alter their behavior. As the animals dive beneath the waves, sensors in the tags gather information on ocean salinity, temperature, and depth. The data are stored and compressed into just a few bits of digital code. When the seals reach the surface, the information is transmitted to an orbiting spacecraft. The satellite also calculates their position based on the distance and direction of the radio signal. Unlike traditional survey ships, the seals can gather information over vast distances, dive under the ice, and work in the harshest winter conditions.

Having attached the tags to southern elephant seals, the researchers are now working in the Antarctic with Weddell seals. This summer, another team plans to try the technology on hooded seals in the Arctic. “This program has probably contributed more oceanographic temperature and salinity profiles from remote reaches of the Southern Ocean than ever before,” Fedak says. “We’re trying to discover what’s important about the seals’ environment and how to protect it. But at the same time we’re able to provide information that oceanographers can use in other ways.”