One jump from chimps to humans - the origin of malaria

Swine flu has made the world all too aware of the possibility of diseases making the leap from animal hosts to human ones. Now, we know that another disease made a similar transition from chimpanzees to humans, several thousand years ago. This particular infection is caused by a parasite, and a very familiar and dangerous one - Plasmodium falciparum, the agent responsible for malaria.

Transmitted by the bite of mosquitoes, P.falciparum infects over 500 million people every year. Its closest relative is a related parasite, Plasmodium reichenowi, which infects chimpanzees. Leading an international research team, Stephen Rich from the University of Massachussetts has discovered that P.reichenowi is no mere relative - it's actually P.falciparum's ancestor.

Rich compared the genes of the two species to build a Plasmodium family tree, which showed that all of the 133 known strains of P.falciparum, from all parts of the world, are united one a single branch on the P.reichenowi lineage. The stem of that branch represents a single event where P.reichenowi crossed the species barrier from chimps to humans.

The new study was possible because of eight newly collected samples of P.reichenowi from wild and captive chimps. Until now, only a single sample of this specieshad ever been isolated. Armed with fresh samples, the team focused their attention on three genes - cytB, clpC and 18s rRNA. They found that those of P.reichenowi are very varied, much more so than its genetically uniform cousin P.falciparum (even though we have over 16 times as many samples of the latter). Chances are that any two samples of P.reichenowi are more genetically distinct that either one is to P.falcarium.

Rich is sitting on the fence as to whether this means that the two species should actually be united as one. But he says that his results clearly rule out the idea that the two Plasmodium species have evolved separately from a common ancestor that itself infected the last common ancestor of chimps and humans. Instead, it's more likely that the genetically uniform species, P.falciparum,evolved from the diverse one, P.reichenowi.

This isn't a new idea. As far back in the 1950s, the renowned anthropologist Frank Livingstone suggested that P.falciparum was an unwitting gift from chimpanzees. He reasoned that as agriculture increased the size of human societies, our encroaching presence in the dwindling forest homes of chimps provided many opportunities for a canny parasite to find fertile new infecting grounds.

Rich suggests that the jump from chimps to humans was driven by an evolutionary battle fought by Plasmodium parasites and their hosts at a genetic level. Part of Plasmodium's complicated life cycle involves infecting red blood cells, leading to one of the classic symptoms of malaria - anaemia. To infiltrate these cells, the parasites recognise a molecule on their surface called GYPA, using a sensor protein of its own called EBA-175.

In chimps, GYPA has a chemical cap called Neu5Gc and it's this adornment that P.reichenowi recognises. Neu5Gc is one of a group of chemicals called sialic acids, and it's produced from a related member called Neu5Ac; just one oxygen atom separates the two. The conversion process is driven by a gene called CMAH - a gene that works in chimps, but that's been crippled in humans. As a result, our GYPA proteins are capped with Neu5Ac instead of Neu5Gc, which explains why P.reichenowi infects chimps but not us.

Some scientists think that a mutation that disabled the CMAH gene provided our early ancestors with temporary relief from P.reichenowi. By blinding the parasite to the GYPA protein, the mutation gave us a powerful advantage. But it wasn't a permanent one; Plasmodium upped the stakes by evolving a version of the EBA-175 that was more relaxed in its choice of targets. This new weapon stuck to human proteins capped with Neu5Ac just as well as they did to chimp proteins capped with Neu5Gc.

This counter-move allowed the parasites to re-exploit their old victims and in time, one lineage - Plasmodium falciparum - developed a preference for the Neu5Ac target. Rich thinks that this final step occurred relatively recently, between five and ten thousand years ago, and gave the parasite an extreme ability to cause disease in humans. The benefits of this mutation allowed P.falciparum to quickly expand worldwide, which probably accounts for its lack of genetic diversity.

The fact that P.falciparumhas only once found a way to infect humans suggests that it's very difficult for the parasite to evolve a protein arsenal that recognises a new type of sialic acid. The same could even be true for other unrelated infections, such as flu. Sialic acids are actually the big obstacle in the way of bird flu viruses spreading freely among humans. The cells of human and bird airways bear slightly different sialic acids on their surfaces and bird flu viruses, for the moment, have a preference for the bird version. 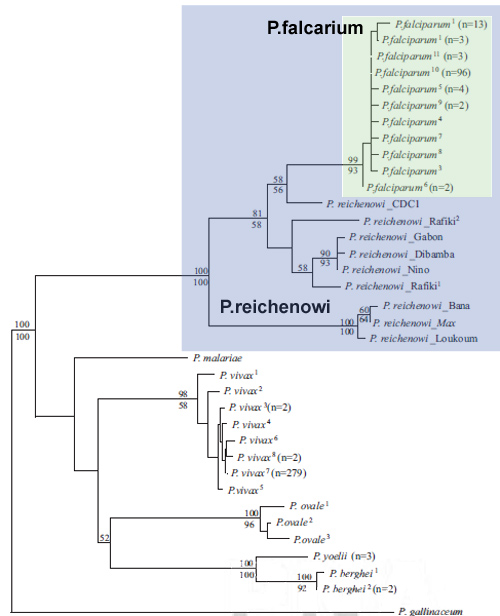 Size matters for mosquitoes but medium-sized males do better